T.J. Oshie and the Power of the Olympics

T.J. Oshie has played six seasons in the National Hockey League. He has 241 career points in 349 games with the St. Louis Blues, was a first-round draft pick and a superstar college player at the University of North Dakota. And until today, there’s a good chance if you knew nothing about hockey, or maybe even knew a little bit about hockey, you didn’t know who he was. 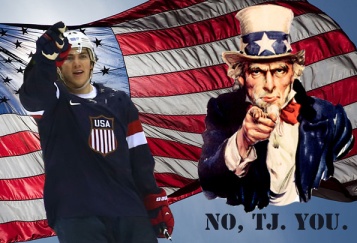 The 27-year-old Everett, Wash., native who made his way to Warroad, Minn., as a youth scored four times on six attempts in the shootout as Team USA earned a 3-2 win over Russia in a huge preliminary-round tilt with major medal round seeding implications. On five occasions, Oshie basically had Team USA’s fate in his hands. It was either a score-to-stay-alive or score-to-win-the-game situation. On his sixth attempt, he won the game.

And now, because he did that in the Olympics, with an unusual captive audience on a Saturday morning after everyone in the East had already woken up, T.J. Oshie is a household name.

There’s no word yet on what the TV ratings will look like for this game, but here’s one indication of Oshie’s popularity after the incredible shootout performance: As USA Hockey noted, Oshie started the day with around 90,000 followers on Twitter (@OSH74). As of this writing, he has   178,000 and that is bound to climb (like it did while I was writing this). From the last goal until about two hours (give or take a little) after the game #Oshie was a top trending topic in the United States and remains a hot topic on all social media. And yeah, he did get a shout out from the White House.

UPDATE: The TV ratings are in. Via Eye on Hockey:

NBC Sports Network drew an average audience of 4.1 million viewers for Team USA’s 3-2 shootout win over host Russia. It is the most watched hockey game in the network’s history, beating out Game 3 of the 2013 Stanley Cup Final.

According to NBC Sports, viewership peaked at 6.4 million viewers from 10 to 10:30 a.m. ET to watch overtime and the T.J. Oshie shootout extravaganza. It was the most watched half hour ever on NBC Sports Network.

Oshie was interviewed by the legendary Al Michaels in NBC’s studio after the game and the network will rebroadcast overtime and the shootout portion of the game to lead off its primetime coverage on Saturday night. NBC Nightly News led off with hockey as the top story. Oshie will be interviewed on the Today Show Tuesday morning with Jonathan Quick as well.

There are even T-shirts already being sold. And in the internet age, is there any bigger sign of success than a meme (well, yes, but I liked this one):

Oshie in Sochi, during the shootout: pic.twitter.com/qbTx99xic7

This is a guy who a lot of people thought didn’t even belong on the team. Yet here T.J. Oshie sits on Saturday night and he’s the most talked about player on a roster that includes Patrick Kane, arguably the biggest American star in the game, and Zach Parise, who had that Olympic moment in 2010 and now even graces a few Olympics commercials (Chobani is proud to be in his fridge).

That is the power of the Olympics, though. It takes a lot a relatively unknown athletes, slaps an American flag on them and builds a story to go along with the triumph that makes them the biggest thing in sports. It’s because for two weeks, everyone is watching.

The Olympics aren’t simply about sports or national pride, though both are obviously a huge part of it. It’s all about the drama. That’s what makes non-sports fans tune in. That is how the Olympics casts such a wide net.

The situation Oshie was in was dripping with drama, the kind an American television audience goes gaga for. It also may have been the most compelling shootout you’ll see, save for a pair of elimination game shootouts in 1998 (Czech Republic-Canada) and 1994 (Sweden-Canada). This involved the U.S., though, and the public was eating it up.

The peaks and valleys of that shootout took any viewer, regardless of rooting interest, on a roller coaster ride of sports storytelling. You really couldn’t have asked for a more perfect scenario to capture an audience and hold them. And it set up perfectly for Oshie to play the hero. It was one-on-one and everyone in the country had their eyes on Oshie and everyone was rooting for him.

It’s moments like these that make you glad the NHL is at the Olympics. They have guys that can be turned into stars by this tournament. Oshie may not score another goal in Sochi, but he scored that one and he won’t soon be forgotten for it.

The NHL is very seriously considering not returning to the Olympics and it’s not hard to argue with their rationale for why it’s not working for them. But I’d be willing to bet the NHL’s online shop sold a few more T.J. Oshie jerseys today and I’m willing to bet a few folks in St. Louis want to see their Olympic star in action in the building or on TV.

UPDATE: According to Fanatics.com, the largest only retailer of officially licensed sports merchandise, Oshie’s USA Hockey shirsey sold out within hours Saturday and “T.J. Oshie” has been the No. 1 search term between Saturday and Monday evening.

That may be an insignificant number in the end, but there’s no denying how much power the Olympics wields and the audience it reaches. And how good is it for the league that a rather large portion of the country stopped to watch a hockey game on a Saturday morning? It can’t hurt.

T.J. Oshie was just another player a few hours ago, but tonight, everybody knows his name and they might even still be chanting it.