Twenty young men, all clad in blue sweat suits, sneakers of all colors and the biggest smiles you’ve ever seen crowded a podium designed for just one person in the Olympic Center in Lake Placid, N.Y. With index fingers pointed to the sky and their other arm around a teammate, the U.S. Olympic Hockey Team gave one more lasting image from a 1980 Winter Olympics that was chock full of them.

When the celebration ended and the players began pouring onto the red carpet below, the last foot to leave the podium represented the last time an American men’s hockey player stood atop the medal stand at the Winter Olympics. 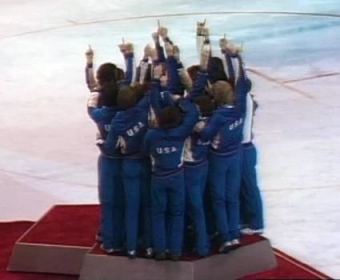 That was 34 years and eight Olympics ago. The Americans have come close twice since, never closer than they were before Sidney Crosby deposited a puck underneath Ryan Miller and into the net in Vancouver in 2010. One goal short. Close is nice, but it isn’t gold.

The U.S. has earned eight silver medals since the first Olympic hockey tournament in 1920, compared to just two gold, won 20 years apart and both on American soil.

When the 2014 edition of the U.S. Olympic Men’s Hockey Team takes the ice Thursday, they do so with an opportunity as good as any they’ve had in the NHL era of the Winter Games. In a lot of ways, it is an opportunity built on the foundation laid by that same group of 20 individuals who found a way to beat the Soviets and fit every last one of themselves on top of that podium.

In the years since 1980, hockey’s momentum in the United States has slowly built. It grew to a roar in 1996 when the U.S. won the first ever World Cup of Hockey, beating Canada in three games in a best-on-best tournament. Was this it? Had the Americans caught up to the world?

It took nearly a carbon copy of that 1996 World Cup champion falling flat on its face in 1998 to serve as a brutal reminder that there was still much to be learned and much to be built.

Four years later, on home ice no less, a crushing third period meltdown in the gold-medal game at the 2002 Olympics once again snatched gold away. That great generation of American players had mostly grown old and by 2006, but the U.S. was still clinging to the past and Torino ended with a whimper.

Then came 2010 and a U.S. team that showed the glimpses of the future. That team overachieved to be sure, but they also earned everything they got and fell agonizingly short.

Now it’s on to Sochi. The Russians are at home and the expectations are lofty. Canada, as always, is favored to win it all. Sweden has iced what should be a gold-medal worthy team. But what of the Americans?

Nearly no one has picked the U.S. to win gold, and if we’re being completely honest with ourselves, it’s probably not a bad bet. And though this is Russia’s Olympics, the moment is as much the Americans’ as it is anyone else’s. This may not be the planned place, but this is the right time.

Hockey’s momentum in the United States, started on the Olympic Center ice in Lake Placid, has built up to this moment in time with this group of players, developed for stardom in the NHL and success on the international stage.

Not a single one of Team USA’s 25 players was born when Herb Brooks engineered the Miracle on Ice. They were, however, alive for what that victory created. From that victory, the game of hockey was no longer that funny game on ice. That win legitimized the sport.

Then Wayne Gretzky arrived in Hollywood, the NHL began expanding to non-traditional markets like Tampa Bay and San Jose and later a host of others. While this was happening, the U.S. born players the 1980 team helped inspire started matriculating to the NHL and became stars of the game, giving new role models to American players in the early 1990s.

The game was no longer just legitimized, it was gaining a small foothold in the American sports culture for the first time maybe ever. That’s when hockey hit its growth spurt. USA Hockey’s playing membership doubled between 1990 and 1997.

There were more kids in more rinks than ever before. As the number of players grew, the depth of talent grew with it. American junior hockey leagues and college hockey programs began seeing its level of play rise with that depth of talent growing.

International success continued to elude the U.S., however, and 1996 brought the birth of USA Hockey’s National Team Development Program, a training ground for the top players in the country to help them achieve their professional goals, but to develop international champions for all levels of hockey.

It took some years, but the NTDP eventually found its way. While that was happening, leagues like the United States Hockey League and North American Hockey League, long excellent developmental paths for American players just kept getting better and better, ensuring that this growing pool of American-born hockey players had a path to elite levels of hockey.

By 2001, the international results started coming more frequently for U.S. national teams. Leading the charge was a group of players born in 1984.

In 2002, the U.S. National Under-18 Team won the first A-pool gold medal for a men’s national team of any kind since 1980. They pulled another first in 2004 with the first World Junior Championship gold.

That group, led by Ryan Kesler, Zach Parise and Ryan Suter, among others, set the U.S. up for a decade of positive momentum internationally.

Gold medals at the U18s kept coming with Phil Kessel helping lead Team USA to gold in 2005 and Patrick Kane playing a large role in securing the first back-to-back gold medals for the U.S. at any level in 2006. In 2009, Cam Fowler was the tournament’s top defenseman as the U18s claim the first IIHF gold medal on American soil since the Miracle on Ice. The next year Justin Faulk scored the winning goal as the Americans completed another repeat in 2010.

Earlier that year, John Carlson scored the OT game-winner to give captain Derek Stepan the chance to accept the World Junior Championship trophy, the second such title for the United States.

Then just last April, after a decade of no medals at the IIHF Men’s World Championship, Paul Stastny had a near record-level tournament, T.J. Oshie brought some offense with him as a late arrival and Faulk played a key role in helping the U.S. capture bronze. It was a sign that maybe the depth was starting to come around.

Thirteen of the players on this American roster were there in 2010 when they fell one goal short. Only this time, it’s their team and their responsibility to lead the USA over the 34-year-old hump. And this time, they’re better than before.

Just look at the captains. Parise, who will wear the C, was driving those early teams to international firsts for USA Hockey along with Ryan Suter, an alternate captain in 2014, who was playing up an age group at the time U.S. teams started having success. Dustin Brown, also a member of that vaunted 1984 birth class, would have been on that 2004 WJC team if not for an injury, but he did win his first international medal that same year as the youngest player on a bronze-medal winning U.S. Men’s National Team.

Phil Kessel and Patrick Kane are among the top five in NHL scoring. Eight different players have 20 or more goals this year in NHL play. Ryan Suter plays more minutes than any other defenseman in the league and a perennial Norris Trophy candidate. Ryan Miller has a Vezina Trophy and Jonathan Quick a Conn Smythe.

USA Hockey really couldn’t have asked for a better time for this group, by and large, to be surging into the prime years of their careers.

Underneath it all, this very well could be the last Olympics the NHL allows its players to attend for the foreseeable future. And if that it is the last Olympics for the NHL, the balance of competitiveness will be shifted in such a way that gold medals for either North American country could be few and far between. Sochi is as close to a now or never situation as the U.S. will be faced with.

Some of the other teams in Sochi are clearly better, but not since 2002 has the U.S. put forth an outfit that has the level of talent to match up as well with the best in the world.

An 11-day tournament is not going to clarify anything about where the U.S. stands as a hockey nation. We may put too much stock into small tournaments when viewing them as a corollary to the bigger picture. Success within this tournament won’t be the declaration of the United States’ arrival as a world hockey power. It’s already there in the number of people playing and following the sport and those achieving success within it. But that doesn’t change the level of expectations or the pressure the players put on themselves.

What the Olympics in particular do offer is the largest stage in sport.  It represents an opportunity for any country to say, even if it is only for an 11-day span, it iced the best hockey team in the world. For the United States, that’s something it hasn’t been able to say in a very long time.

Though the bigger picture speaks for itself, it’s hard to look at this team and not think the last 34 years have built up to this tournament in some way. The wave of growth of the game nationally, of a focus on developing the players and on a commitment to building an international hockey power is cresting. So if not now, when?