Up until 1998, college hockey was the most direct feeder system for the U.S. Olympic Men’s Hockey Team. Players were either currently enrolled or recent graduates of some of top college hockey programs. With the NHL players now participating, those ties to college are a little less prominent, but only in proximity to enrollment.

According to College Hockey, Inc., 34 Olympians representing five different countries and 19 different schools are former college hockey players, the most since NHL players started competing in the Olympics. Twenty members of the 25-player U.S. Olympic Men’s Hockey Team roster spent time in college hockey before embarking on their NHL careers.

The higher number says a few things about college hockey. That the vast majority of Team USA is NCAA trained is unsurprising. The players are still at an age where they grew up with the NCAA being the primary path to the NHL for American players. What makes this year’s total, which is five higher than the previous high of 29 in 2002, is that it reflects the impact of non-American players on the college game.

Austria has six former NCAA players on their roster including captain Thomas Vanek, who played for the University of Minnesota where he won a national title in 2003. That’s one more than Canada’s roster, though several key players on the Canadian roster came from the college ranks.

Five Canadian Olympians played at least a portion of their developmental years in the NCAA, and one of those guys just so happened to be named the best forward at the 2010 Olympic Winter Games in Vancouver — Jonathan Toews. Top defenseman Duncan Keith spent time at Michigan State University, while the latest addition, Martin St. Louis, is one of two Vermont alumni on Canada’s roster (the other is Patrick Sharp). Chris Kunitz, who is likely to occupy the left wing alongside Sidney Crosby, went to Ferris State.

There are also two college hockey Swedes in the Olympics. What was once a rare occurrence, the frequency of strong Swedish players coming to college hockey is increasing. Gustav Nyquist, who attended the University of Maine, and former University of Michigan captain Carl Hagelin will be part of Sweden’s entry in Sochi.

On top of having the two players, Sweden also has a former NCAA player on their bench in assistant coach Rickard Gronborg, who played three years at St. Cloud State University. (h/t to Jeremy Larson for the heads up on that one)

There were 12 natives of Sweden in college hockey during the 2012-13 season, more than any other non-North American country.

Perhaps most exciting for college hockey is the fact that an active player will be participating in the Olympics. Ralfs Freibergs of Bowling Green State University will represent his native Latvia. The sophomore defenseman has 20 points this season for the Falcons. He only played eight games last season as NCAA ruled him ineligible because his junior team played some games against pros. The fact that the 22-year-old was able to make Latvia’s team despite many KHL and some NHL players from the country is a pretty big accomplishment.

Additionally, Latvian star Zemgus Girgensons was slated to attend the University of Vermont, but was offered a pro deal by the Buffalo Sabres out of the United States Hockey League, an extremely rare occurrence. He’ll be a key player for the Ted Nolan-led Team Latvia.

College Hockey, Inc., came out with a fantastic infographic to put a lot of what I just wrote in simpler terms, but I figured it was worth providing some context. 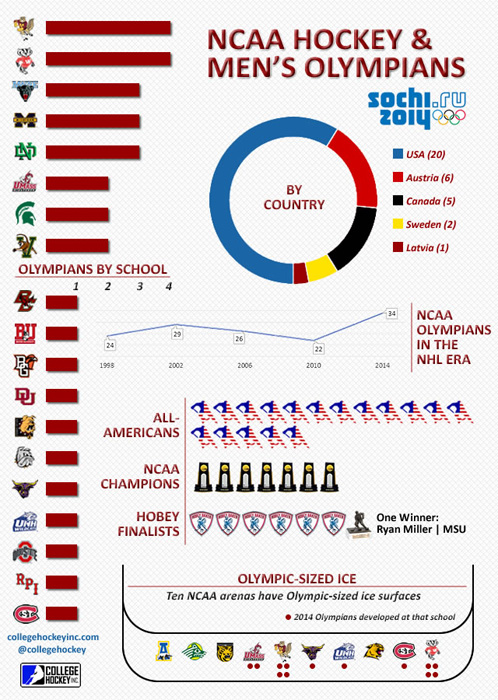 One of the things I found most interesting was the little graphic about Olympic-sized ice. Since the NCAA was one of the best training grounds for the Olympics before NHL players took over for the amateurs, some schools had Olympic regulations surfaces. That number has shrunk and may continue to shrink, but it’s worth noting that 13 of the 34 college hockey alumni that will compete in the Olympics played on bigger ice surfaces. That experience, which is rarer among North American players, will likely come in handy for some of those players when they get on the big ice.

I’ve always liked the big sheets in college hockey and the fact that they aren’t all uniform across the country. There’s nothing wrong with a little variety and it forces players to hone in on other skills sometimes, even if it’s just for a brief weekend.

The landscape has vastly changed, however, and it’s understandable why they may eventually go away from Olympic surfaces. The schools have to focus more on developing players for the NHL as opposed to the Olympics.

Who knows, though, things may change for the next Olympics. There’s already plenty of public detraction among NHL owners about shutting down the league every four years for the Olympics. Sochi is going to be a big test to see if the league even remotely considers sending their players to Peyongchang.

Then maybe college hockey becomes the primary feeder for the Olympic team again. (Side Note: That sounds fun in theory, but it would be very tough for the U.S. and Canada to compete in a non-NHL Olympics scenario with how international hockey’s landscape has changed. The European pros are better now and they’d still be able to go, making it a lot tougher for younger players to stack up well enough.)

No matter the future of the Olympics, those closely connected to college hockey must be absolutely thrilled that former college players will figure more prominently in Sochi. The fact that the total is not confined to the U.S. team is even better.

College hockey remains a strong developmental path to those who choose it, even as the competition grows in the race to attract top players and 34 Olympians certainly help prove that point.

For a full list of NCAA-connected players heading to Sochi, collegehockeyinc.com has you covered.