A few months ago, Labatt USA advertised that it would be selling its Labatt Blue and Labatt Blue Light beer in special cans designed like U.S. Olympic Men’s Ice Hockey team jerseys from years past. Judging by the reaction I got from people on Twitter, it was a pretty awesome idea.

I mean, just look at these things.

The cans commemorate the jerseys for U.S. Olympic gold medal teams in 1960 and 1980, as well as the silver medals in 2002 and 2010. Pretty neat idea to capitalize on the growing popularity of Olympic hockey coming out of the Vancouver games.

After several folks in recent weeks noted to me that they could not find the cans, I asked Labatt USA if the cans were available and where.

The cans are indeed available now, according to Labatt USA on Twitter, but are only in select markets.  I don’t know for sure, but I’m guessing these are a very limited release, so finding them could be on the more difficult side.  Here are the states you can currently buy Labatt cans with USA jerseys on them (in alphabetical order):

A friend of mine did happen to get his hands on some, so they do exist and you can find them. 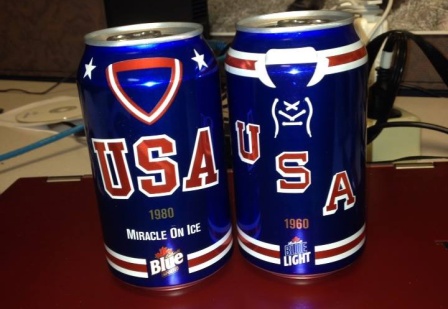 I don’t know if they have any plans to expand that net of states, but I’m guessing folks in a lot of markets will want to get their hands on these.

Also, for you USA fans, all men’s game start at 7:30 a.m. ET. The good news is that two of them are on the weekend, so it’s at least a little more socially acceptable to crack open a cold one in the early-morning hours.

Labatt has been a big sponsor of USA Hockey for years and does a lot of work with USAH’s adult hockey department. So if you’re wondering why a beer company primarily known as a Canadian one (even though it is now American owned after InBev sold it to North American Brewries), it’s a big partner of USA Hockey’s.

For those of you feeling conflicted about drinking a beer with a USA logo, but also includes a small maple leaf, you can alter the thumb position on the can to make those concerns go away.

As always, if you are going to consume from these cans and not just gaze at them patriotically, please do so responsibly.