Five different U.S. teams were in action last week during the IIHF’s first designated international break. Three of those teams won tournament titles, so not a bad week for USA Hockey.

The U.S. Junior Select Team earned a 4-1 victory over Russia Sunday to win the World Junior A Challenge for the fifth time in six years. The U.S. National Under-17 Team captured its fifth straight U17 Four Nations Tournament championship and the U.S. Men’s Select Team claimed the Deutschland Cup.

The U.S. National Under-18 Team had a five-year winning streak at the U18 Four Nations Cup snapped, but finished second in the tournament, while the U.S. Women’s National Team was stunned on home ice to place third in the Women’s Four Nations Cup.

Coming up after the jump, a quick look at each tournament.

The U.S. Junior Select Team, made up entirely of players 19 or younger from the USHL, ran roughshod over the tournament field at the World Junior A Challenge to claim its fifth title in six years and second straight.

It was an overall dominant performance for Team USA, which outscored opponents by a 23-10 margin.

Two players were particularly outstanding for the U.S. squad in the event.

Nick Schmaltz, a North Dakota commit currently playing for the Green Bay Gamblers, broke the single-tournament and single-game scoring records. He finished WJAC play with 12 points, including a record-tying eight assists. His five-point game against Switzerland in the semifinal was a record-setting affair as well. The 2014 NHL Draft-eligible talent looked like he was toying with the field at times.

Schmaltz’s linemate Connor Hurley had himself a tournament as well. The Buffalo Sabres pick and Muskegon Lumberjack finished with 10 points, which included seven assists. That was good for second in the tournament and the second highest mark by an American in the event.

Schmaltz, Hurley and defenseman Neal Pionk were named to the all-tournament team.

The biggest pre-Olympics tournament in Women’s hockey pits Team USA against Canada, Sweden and Finland in a round-robin style tournament with the two best teams playing in a championship game at the end. For the first time since 1996, that championship game didn’t include the U.S.

A stunning 3-1 loss to Finland in the round-robin portion doused Team USA’s hopes of advancing to the Four Nations Final. Finland netminder Noora Raty, former goalie for the University of Minnesota Women’s Team, made 58 saves to give Finland its first victory over the U.S. since 2008.

According to NBCSports.com, the Finland defeat was the first time the U.S. has lost to a nation other than Canada in regulation in an Olympics, World Championships or Four Nations Cup, spanning 161 games. So, kind of historic.

Team USA also lost to Canada in the round-robin portion, running its 2013 pre-Olympic record against its big rival to 0-3.

Is this cause for concern? Well, sure. The U.S. Women’s Team hasn’t played its best hockey in the early months against international foes (though the women did trounce Sweden twice in the tournament).

Though the loss to Finland stings, and shouldn’t be accepted, it’s actually kind of a good thing for international women’s hockey. Countries like Finland and Sweden have to find a way to get up to a level of the U.S. and Canada. If they don’t, women’s hockey is in real danger of getting removed from the Olympics.

After such dominance from the U.S. and Canada in 2010, there were plenty of rumblings that if the other countries didn’t improve, the IOC would consider taking women’s hockey out of the games.

Finland has an all-world goalie that is closing the gap for them at least. So while it was a big win for Finland, it was also a win for women’s international hockey.

For the American women, it’s back to the drawing board after a bit of an unsavory wake-up call. One positive to take away, Kelli Stack was the tournament’s led the tournament with four goals and seven points.

The U.S. National Under-17 Team handled themselves well in their first taste of international competition this season. The squad from USA Hockey’s NTDP ran through the tournament field with relative ease in Prievidza, Slovakia, over the weekend.

The U17s went undefeated in the round-robin style tournament, capping the event with a 5-3 victory over Russia Sunday. Team USA out-scored its opponents 18-7 over three games and also posted an 8-2 win in pre-tournament play against Slovakia. Switzerland was also part of the tournament.

This is an important event for the U17s as it is the first of a potential six international tournaments the players will compete in over two years in Ann Arbor. Up next will be the World Under-17 Hockey Challenge, the marquee U17 event in the world. Getting momentum in the middle of a very tough first half of the season certainly gives the club something to build off of going forward.

The U.S. National Under-18 Team, also made up primarily of players from the NTDP, fell just short at the U18 Four Nations Cup. With a 3-2 loss to Sweden in the tournament’s opening game of the round-robin style tournament, the U.S. needed to get a little help to earn the title.

Instead, Team USA finished second for the first time in six years. Team USA managed a 4-3 overtime win over host Finland in the second game and downed Switzerland 6-2 in the tournament finale.

Jack Eichel was a real bright spot for the U.S. He had points in every game and finished with a team-best seven points in the tournament. From those on the ground in Turku, it sounds like Eichel was a continual threat, which is a great sign for this team going forward. Sonny Milano had six points to finish second on the squad.

The U.S. have a bit of a long break between international events now, with the U18 Five Nations coming up in February. A few players on this club may have a case for the World Junior Championship, so their performances in Turku may play a role in that decision process. One would have to think Eichel helped his cause in that regard, in particular. 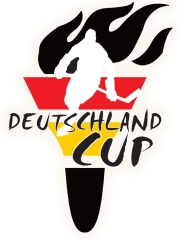 The U.S. Men’s Select Team, made up primarily of professional players from European clubs won the Deutschland Cup after a 7-4 victory over host Germany in the round-robin style tournament. It is the first tournament title for the U.S. since 2004.

USA and Canada rotate their participation in this tournament, with each country going every other year.

After losing the opening game to Slovakia, Team USA needed to be perfect over the next two games and get a little help to have a chance. They got what they needed and managed to come back against Germany to claim the title.

The U.S. roster included many former NHLers including Peter Mueller and Tim Stapleton who each posted five points in the tournament to share the team point lead. Chad Kolarik was one of three players who had three points in the final game against Germany.

This tournament kind of helps keeps U.S. players abroad fresh and give them an opportunity to represent their country. Guys like these should come in handy for future World Championships, especially in 2014 when the U.S. is likely going to have a tough time putting together a roster in an Olympic year. So that’s where this event comes in handy a bit.

So three out of five titles isn’t too bad, especially since the U18s so narrowly missed making it four. The struggles of the Women’s team are a little cause for concern heading into Sochi, but they’ll remain together training right up until the puck drops in February on the Olympics. Plenty of time to get things worked out.

For the most part, a really good showing for USA Hockey.