Sometimes in life we get lucky. Every now and again, we’ll meet a person that impacts our lives in ways they, or perhaps even we, may not even realize. For so many people involved in hockey in the United States, that person was Tim Taylor.

The former Yale head coach and longtime USA Hockey servant passed away peacefully Saturday afternoon at the age of 71.

In 1994, he coached the U.S. Olympic Hockey Team, a job he called the “pinnacle of the coaching profession” at the time. More recently, Taylor helped drive a significant shift in how U.S. National Junior Teams were scouted and selected, serving as director of player personnel and essentially head scout. In the four years since that change, Team USA has two gold medals and a bronze. It’s fitting that the last team he helped build was a champion.

It’s also fitting that the Yale Bulldogs won their first national championship two weeks ago. With nearly 30 years as the head coach there, Taylor laid the foundation on which that championship team was built. Leading the Bulldogs to its unlikely title was head coach Keith Allain, one of Taylor’s former players at Yale and immediate successor behind the bench. Taylor also gave Allain his start in coaching after his playing career wrapped up prematurely.

“I didn’t really know what I wanted to do, and Tim called me up and said, ‘I think you should come back and coach,'” Allain told College Hockey News. “The boost of confidence that gave me, I’m thinking, ‘Geez, if Tim Taylor thinks I can coach, maybe I can coach.'”

I loved reading this quote, because I’ve met so many people that can credit Taylor’s belief in them for putting them on a path to success, from players to coaches to even myself. He was a great hockey coach, but a better human being.

When Taylor was reassigned within Yale’s athletic department after his 28th season coaching the Bulldogs, he could have moseyed quite nicely into retirement. If you know Coach T, there’s no such thing as retirement. He wasn’t done yet. He had more to give.

So in 2007, Taylor surprised many when he asked to join USA Hockey’s National Team Development Program as an assistant coach when the position became open. Most often filled by a young up-and-comer, Taylor brought a different perspective to the job, one of experience. Despite his experience, however, Taylor was a good lieutenant to John Hynes, doing all the unglamorous jobs like ordering subs for the bus trip home and dealing with travel logistics. A former Olympic head coach, just doing his part… As a volunteer.

Taylor spent two years as essentially a full-time assistant coach working with the top players at the NTDP and in working there, built a better familiarity with the entire U.S. player pool.

It was from there that Taylor started envisioning a centralized way to scout players that were eligible for the U.S. National Junior Team the following year. He spoke often with former Hockey Canada chief scout Al Murray, now Tampa Bay’s director of amateur scouting, and knew that the best way to pick the right players was to spend more time watching more players over the course of two seasons.

Taylor knew the player pool backwards and forwards by the time a decision needed to be made on who to bring to camp, or who to select the final roster. He didn’t have final say, but it was with his guidance that USA Hockey was able to build gold medal teams in 2010 and 2013. There were a lot of guys that wouldn’t have made those teams in previous years due to a lack of familiarity. Taylor changed the tide and in turn, helped change USA Hockey’s fortune at the WJC.

He shared with me his philosophies on putting together those teams and his process in this post here.

Coach T didn’t see the 2010 games in Saskatoon. He found out that he was sick and began treatment for cancer. He’s not in the team picture in person, but he kind of is. There are plenty of players in that picture that benefited from the extra looks Taylor afforded them. He knew they could do the job and they did.

Coach Taylor did see the games in Ufa in 2013. He was sick again, but he was there. The fruits of his many hours of scouting and thinking materialized before his very eyes. A gold medal was placed around his neck. Coach Taylor was a champion again.

I met Coach T as an intern with USA Hockey. It was just a simple meeting and a quick hello. He had given a speech that year at USA Hockey’s Annual Congress after receiving its distinguished achievement award, so my respect and admiration for him was immediate.

When I joined the National Team Development Program in 2008, he was a familiar face in a new place. He was kind to a young guy who was perpetually nervous in his first “real” job.

Over the next two years, I got to know Coach Taylor well. Being a PR guy in an office full of hockey ops people can be tough, but I never felt out of place. I’d often be working later into the evening. The exit to the parking lot was placed so that I would always see Coach T in the NTDP’s conference room, where he had a temporary office set up. He was still there, too, not because he had any pressing work, but because he couldn’t stop. A true student of the game, there was too much to ponder in those quiet evening hours.

He’d be watching video, sometimes of our players, sometimes of Pavel Bure highlights or something like that. Every time I walked by, I’d wish him a good night and regardless of what he was doing, he’d stop and say goodbye. That was unless he wanted to hear how my day went or what I had planned for that evening or just how I was doing in general. Then we’d talk for longer.

I’ve had the good fortune of being at the World Under-18 Championship with him four times. In Sochi for the tournament now, this is the first I’ve been to without him here, too. It hasn’t felt the same.

I knew that Coach Taylor was well known and well respected in the hockey community, but it wasn’t until the night before my wedding where I discovered that Taylor’s reach was even farther than I’d realized.

In Waterloo, Iowa, outside of a Holiday Inn, I was walking out to get something from my car before rejoining family for post-rehearsal drinks. I must’ve been wearing a USA Hockey polo or something for a stranger to stop me in my tracks. After some small talk, he asked what I did for a living and I told him about working at USA Hockey. His eyes got wide for a second and he said, “Hey, do you know a guy named Tim Taylor?” Somewhat shocked, I responded, “You mean the Yale and Olympic Coach Tim Taylor?”

“Yeah, that’s him,” the stranger said. “He was my youth hockey coach.”

After playing at Harvard, Taylor skated for the Waterloo Black Hawks when the USHL was a minor pro league. On the side, he coached Waterloo’s youth hockey program when it was in its infancy. Among his players was the stranger outside the Holiday Inn and future Northern Michigan head coach Walt Kyle. Soon he’d return to Harvard to be an assistant coach. So basically, his coaching career started with those kids in Waterloo, just an hour’s drive from where I live now.

I was stunned to have found someone in Waterloo, Iowa, in a chance meeting and subsequent small talk to have known Tim Taylor. That was his reach. That was his hockey life in a nutshell. No matter where he went, he made an indelible impact.

You may not have known his name before today, but there isn’t a person who’s met him who doesn’t love him dearly. From NHL coaches and GMs to equipment managers to young PR guys just starting out.

In Sochi, the outpouring of condolences and support shown to the U.S. staff in the wake of Taylor’s passing has been pretty incredible. He was revered in international hockey circles despite the fact that so often he was an opponent.

One look at Twitter will show you that players young and old were positively impacted by Coach Taylor. He was beloved by the teenagers at the NTDP, despite an age gap of more 50 years.

You would think that a person with all that experience and all that knowledge would be set in his ways, but that was Coach Taylor’s gift. He was without ego. He knew the game well enough to know you have to adapt, you have to adjust and if you’re not thinking of ways to do things better, it will pass you by. The game of hockey never passed Coach T in his 71 years.

When I left USA Hockey in 2010, I didn’t know what I was going to do. I knew I didn’t want to leave hockey, but moving to Iowa for my wife’s work meant that I had to find a new way. I thought about starting a blog, because it was the only way, it seemed, to stay connected to the game I cared so deeply for.

I knew enough to get started, but I still lacked the confidence to find my own voice. I started texting with Coach Taylor, bouncing questions off him about the World Juniors. His responses told me I was asking the right questions, the kind of questions I could answer on my own in the blog.

I think it was only a matter of days after those initial texts that United States of Hockey had its first post. When I saw him again in Germany at the World U18s that same year, he notified me that he had been reading every now and again and thought I was doing a good job. He kept giving me ideas for new content and what he found important. It was that type of encouragement that instilled even more confidence in me as I was still trying to find my way.

Tim Taylor was a believer. It was his belief in others that gave them the confidence to succeed. That was his gift. It worked for players at Yale, Allain, for the young guys at the NTDP, for Allain and numerous coaches throughout the country, for the youth players in Waterloo, and again, for the young PR guy who was eager to know more about the other side. He cared.

My last encounter with Coach Taylor was at a restaurant in the Detroit airport last April. We had just gotten back from Brno, Czech Rep., the night before and were waiting for flights to take us to our respective homes. We got to the terminal early and decided to grab breakfast together. We sat for about 45 minutes, eating and talking. We talked a lot about the players that had just won the U18 gold medal 48 hours prior and the future of the game in our country. Then the conversation switched and he asked me about my future and my hopes. It meant the world to me that he cared enough to ask and even more when he listened intently.

Despite all his accolades and all who admired him, there was nothing Tim Taylor loved more than seeing others succeed. 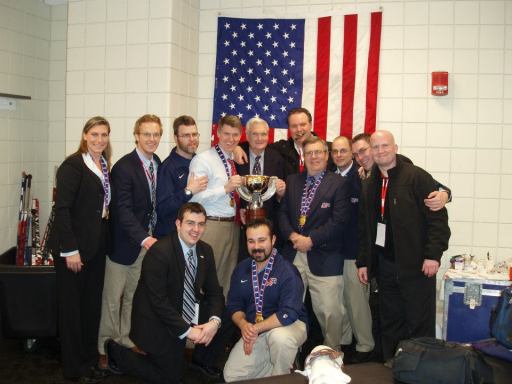 Thanks for everything, Coach.