This team wasn’t supposed to be here. They had talent, sure, but no one, not even me, picked this team to win gold. The U.S. National Junior Team, coming off of back-to-back losses to its bitter rivals in Russia and Canada in the prelims, won its next four games, all of which were in elimination situations. Team USA now has its third ever gold medal at the World Juniors and second in four years after beating Sweden 3-1. 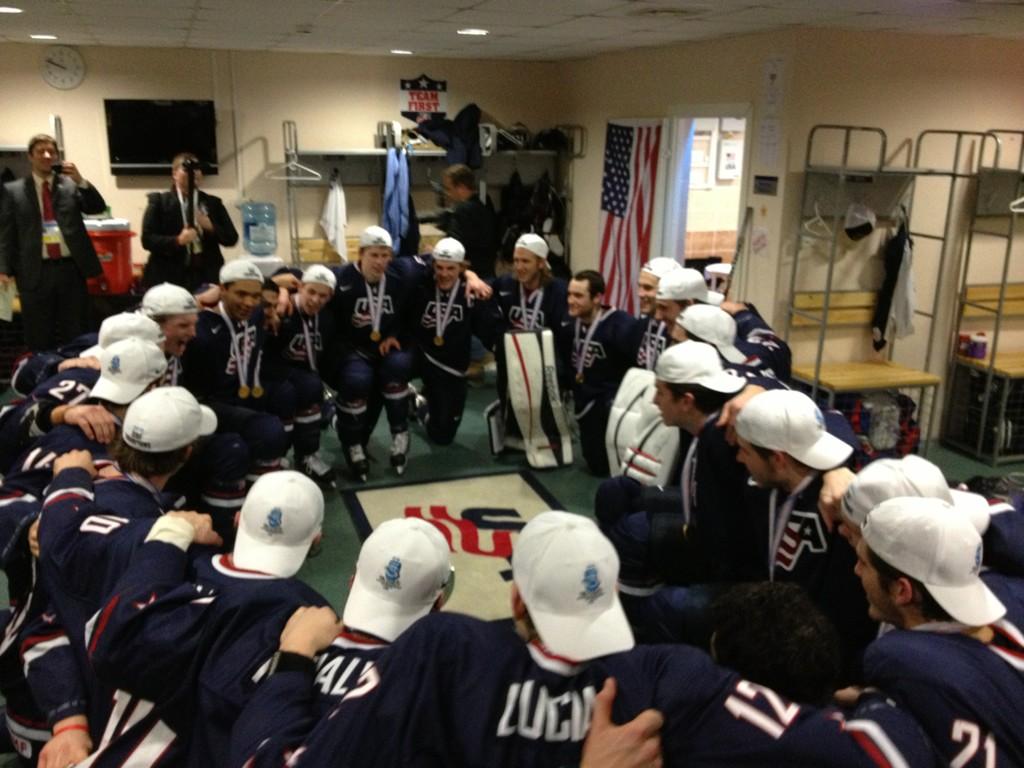 After last year’s shocking seventh-place finish, featuring better talent up front than this year’s team and a WJC gold medalist in net, it was anyone’s guess how good this American group would be. Then there were the preliminary-round losses where the offense looked anemic. It should have deflated this team, but it didn’t.

Facing another trip to the relegation round, the U.S. rolled Slovakia, 9-3. Next was the quarterfinals with the Czechs. 7-0. Then came Canada, with all the firepower afforded them by the NHL Lockout and the U.S. steamrolled their fiercest rival by a 5-1 margin.

After that game, it would have been so easy for a let down. The emotions of that victory were high and potentially intoxicating, but the Americans said all the right things before leaving the rink. Every player tended to utter the words, “One more.” It was a businesslike approach today and it paid off.

Going up against the defending gold medalist, with some of the best forwards Sweden’s ever had in this tournament, the United States held them to one goal, the game’s first in fact. Rocco Grimaldi, benched for the entirety of the Slovakia game, save for serving a bench minor, scored twice in the second period today to propel Team USA to a win.

The players obviously did their jobs. None were better than Gibson who finished with a .955 save percentage, a new American single-tournament record at the WJC. His 1.36 goals-against average ranks third behind two guys that played one fewer game. It was the single-greatest tournament for an American goaltender in this tournament’s history.

The defense, led by Jacob Trouba, Jake McCabe and Seth Jones, was dominant at times. They had their best game as a group against Sweden today and it showed on the score sheet. Blocking shots, breaking up passes, playing physical and sparking the U.S. transition game were all big parts of what made them successful. All seven were involved in some way.

Then it went right down to the forwards. Two goals off of funny bounces, created by the effort of a 5-6 forward from Rossmoor, Calif., gave the Americans the 2-1 lead after falling behind earlier in the middle frame. Here are both (s/t Puck Daddy).

This play is pure effort from Grimaldi, who retrieved the puck in the corner, and at 5-6, won a board battle against a bigger player, created the space needed and just fired the puck on net. For a guy who couldn’t get a bounce all tournament and hit two posts on the same shot earlier in the game, he got a squeaker.

Then… the game winner.

How about the little guy getting in there with some net-front presence and getting another bounce. Trouba did well to get it off at the right time and in it goes off of Grimaldi.

John Gibson, who had been sensational all tournament, even in the losses, was named the tournament’s MVP and received the directorate award as the tournament’s best goaltender. That was decided even before he closed out his best game of the WJC, which included a dazzling save on a third-period wraparound chance, just getting his toe to the post in time.

Jacob Trouba was named the tournament’s best defenseman after playing well in both zones and leading all blueliners with nine points. His shot hit Grimaldi and deflected in for the game’s go-ahead goal and capped what was one of the best performances by an American defenseman in this tournament.

The U.S. also had four of the six players named to the tournament all-start team: Gibson, Trouba, Johnny Gaudreau and Jake McCabe.

McCabe had his best game as well and was likely team USA’s best defender overall in the gold-medal game. The team captain, who received rave reviews internally for his leadership, is the second Wisconsin Badger to serve in that role and lead the U.S. to gold. The last was Derek Stepan in 2010.

Johnny Gaudreau was buzzing all game, but failed to score. It didn’t matter. He still led the tournament with seven goals, all of which came in the three elimination games leading up to the gold-medal contest. He fell just one shy of the U.S. tournament record set by Jeremy Roenick.

Then there was the coach. Phil Housley, from the second he was named to the post by USA Hockey, there were questions. With his only head coaching experience coming at the Minnesota high school level, some wondered why, beyond his name, was he picked?

His decisionmaking early in the tournament was questioned to no end. His use of Alex Galchenyuk, to the first D pairings to the system to everything. Many coaches are emboldened by such criticism, sticking to what they’ve decided and running it into the ground. Housley was the opposite. He wasn’t affected by the criticism at all.

He made several key adjustments throughout the tournament without having to sacrifice his game plan. He also made some huge decisions that put this team in a better position for gold throughout the event. Each move made was the right one going back to when the team was selected in early December to the final cuts made. Without those early decisions and later adjustments, the team doesn’t win.

The architects, which includes Housley, his assistants Mark Osiecki (who was in this same role in 2010 and 2011 for bronze), Grant Potulny and David Lassonde on the bench, and Jim Johannson and Tim Taylor in the “front office” deserve a lot of credit. They didn’t make all of the obvious choices. They simply made the right ones.

The win is a big one on a lot of levels because of how this team got to where it did, the questions that surrounded them at the beginning and the competition they had to face to get to this point.

They weren’t supposed to be here. Now they’re the only ones left.