The U.S. National Junior Team’s preparation for the 2013 IIHF World Junior Championship continues today in Helsinki. After Thursday’s thrilling 3-2 overtime win against Sweden, most of the decisions have likely been made about who’s in and who’s out for Team USA. 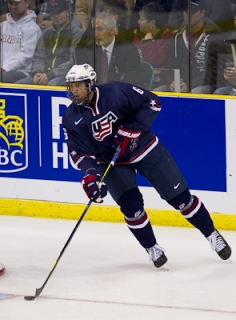 There’s still three cuts to make, so one last practice as an evaluation point for a few players is all that stands between the U.S. staff and naming its final roster.

Team USA will meet Finland Saturday. Expect that roster to look like the team heading over to Ufa as it will be the final tuneup before the games start to count. We’ll have a full preview of that final exhibition game later today on United States of Hockey.

Coming up after the jump, rounding up some of the latest Team USA news including Seth Jones’ bold statement, the return of your (second) favorite American hockey blog, and other links.

Seth Jones may not have played against Finland, but he still made a few headlines after portions of his interview with TSN’s Mark Masters aired during the Canadian network’s broadcasts.

The big defenseman was asked how Team USA stacks up with the rest of the competition, particularly Canada, Russia and Sweden.

“We have a lot of speed up front, we’re great defensively and we have good goaltending. We have all the pieces to win a gold medal this year.”

Masters, perhaps surprised and Jones’ candid reply asked him again “So you think of all the teams coming into the tournament, you think you’re the best.”

You can see his comments here, along with the highlights from USA-Sweden.

James Duthie and Bob McKenzie had a little back and forth after the interview to discuss the confidence coming from Jones and neither made much of it. Really it’s only bulletin board material if you want to stretch it into it, which seemed to be the sentiment of the TSN studio duo.

More than anything else, it seemed more like a message from Jones to his own teammates. I’ve interviewed Jones several times and every time he’s going to give you a good, honest answer. There’s no filter of cliche’s which is awfully refreshing in hockey. When Jones says he feels his team is the best in the tournament, he means it.  And to be honest, why should he feel any different?

One of the things the U.S. has seemingly lacked in a lot of the tournaments its failed to win (and there are many) is that aura of confidence. If you’re part of one of the big teams in the tournament, you should probably feel like you’re the team that should win the whole thing.

Jones’ comments come off as quietly confident and that can rub off in a good way on the rest of the team. Maybe it’s not said as much in the locker room, but that very public message should resonate with Team USA, which is a big reason Jones will be looked to for leadership this year.

I chuckled after Jones’ affirmation after Masters’ clarifying question. It’s pretty rare to hear that a week before the tournament is to begin, but it could be a little spark for the rest of the team.

Coming off a seventh place finish, you might say yourself, who is Jones to talk about being the best tea?. Well, he wasn’t on the team last year. He’s got two gold medals from the last two Under-18 World Championships and he could be the No. 1 pick this year. Sounds like he might know what he’s talking about.

It doesn’t really matter what we or anyone else think about his comments. All that matters is how it’s taken by the guys in his own locker room.

Now the U.S. has to back up his words with their play, but there’s nothing wrong with a little extra swagger behind the USA crest.

The highly-entertaining, culturally-inspiring hockey blog, The Sleeping Giant has returned for another World Junior Championship. It really is the season of giving.

The brainchild of great American patriots Ryan Lambert, of Puck Daddy infamy, and Chemmy of Pension Plan Puppets, The Sleeping Giant is a mix of America and more America. It’s like an American Big Mac washed down with a Super Big Gulp of America.

Each of its four entries since its long hiatus belong in some sort of Hall of Fame. Don’t forget to scope the tags at the end of each post, which only enhance the great American experience.

You can check out their work at thesleepinggiant.us (of course) and you can feel the sting of their 140-character barbs by following @USAbesthockey.

I’m Chris Peters, and I approve this message.

— The NHL canceled more games, this time through January 14. None of the national teams in Ufa will have to worry about losing star players if a new CBA is reached. (NHL.com)

— Bruce Peter has been providing terrific international coverage at SB Nation for the last few years and has continued doing so in the lead-up to the 2013 World Junior Championship. He has previews of Canada, Germany, Sweden and Switzerland so far. You can also follow Bruce: @puckworlds

— NHL.com mic’d up Phil Housley at one of Team USA’s practices in New York. (NHL.com)

— Housley’s full-time coaching job is with Stillwater H.S. in Minnesota. In their coach’s absence, the Ponies managed to upset No. 2-ranked Minnetonka on a late goal. It was Tonka’s first loss of the year, so this is a pretty big upset. (MN Hockey Hub)

— USA Hockey has a snappy new tournament website for the World Junior Championship at worldjuniors.usahockey.com (USAHockey.com)

— To close this out, here’s a video from the IIHF previewing Team USA for the 2013 World Junior Championship.