NTDP Goalies Get Patriotic With Masks

I don’t know if you guys know this, but I kind of like America. If you’re reading this blog and you’re from America, you probably like it too. One of the best things about covering the national teams is seeing how the goalies get creative with the American imagery for their masks.

There was Jack Campbell’s beautiful, if unlucky, Captain America mask. Ryan Miller’s Olympic bucket got a lot of attention. Rick Dipietro’s 2006 Olympic mask was stunning. Mike Richter didn’t even have to change his Rangers lid when representing the U.S., because it doesn’t get much better than his iconic Lady Liberty design.

The young goaltenders at the National Team Development Program have the fortune to get a USA-themed design that will last all season long. USA Hockey recently shared the designs for two of its three goalies for the U.S. National Under-18 Team and they’re both pretty great.

Photos after the jump.

Thatcher Demko is new to the NTDP this season after spending last year with the Omaha Lancers. With the opportunity to represent his country, Demko decided to show some appreciation for the troops, past and present with his Team USA design:

The mask invokes memories of Miller’s mask with Uncle Sam rolling up the sleeve. Demko’s is a little less cartoonish than Miller’s effort. Uncle Sam looks like he’s about to use some of that old-man strength and punch some disrespectful whippersnapper right in the mouth. The backdrop of the American flag gives a really sharp look to the design and if you payed attention, the names of significant battles throughout American history are listed in the red stripes of the flag.

The tribute to the veterans of war carries over to the other side.

Sometimes you wonder if teenagers are aware of what’s going on in the world and the sacrifices that are being made by the men and women in service. Demko made sure to pay tribute to them in the best way a goalie could.

Demko also has a tribute to Ian Jenkins, the young goaltender who tragically passed away just over a year ago, on his back-plate. Jenkins, a 1995-born player, was beloved by teammates and opponents. He was set to join the OHL’s London Knights before his passing. Last season, the entire U.S. National U17 Team wore stickers on their helmets in memory of their fallen friend and Demko makes sure he carries Jenkins’ memory with him every game.

UPDATE: Thanks to Thatcher’s dad, Brenton, here’s a photo of the netminder’s back-plate. 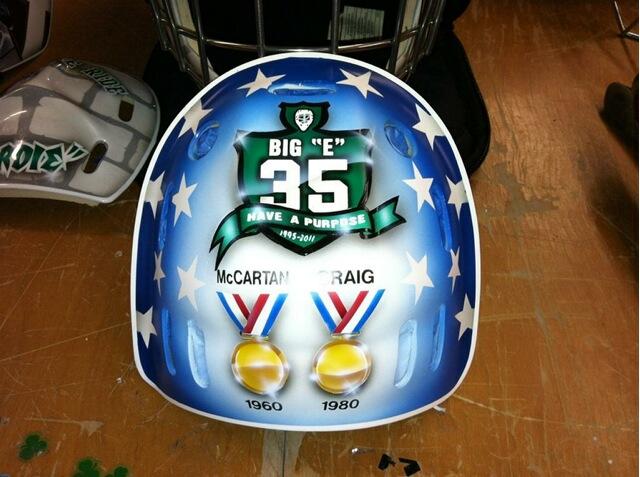 Jenkins’s favorite motto was “Have a Purpose,” and has been a bit of a rallying cry for his friends, former teammates and opponents. There is now a memorial foundation for Jenkins, which you can learn more about by clicking here.

In addition to his tribute to Jenkins, Demko also honors the two U.S. Olympic gold-medal-winning goaltenders Jack McCartan and Jim Craig. Both of those now legendary netminders were perhaps their teams’ MVPs en route to Olympic gold. Not a bad pair to try to emulate for a young American goalie.

The other mask belongs to Hunter Miska, a native of North Branch, Minn., is a 2013 NHL Draft Eligible.

If his mask got a little extra love and care, it’s probably because his father Todd painted it. Todd Miska has been designing goalie masks for decades now and has done the artwork for guys like Eddie Belfour, Miika Kiprusoff, Evgeni Nabakov and Nicklas Backstrom. Todd Miska also designed all of the masks for the NTDP goaltenders last season.

This year, Hunter, who has only been playing the position for a few seasons and quickly rose up the charts in his age group, has a mask that honors both his regional and national heritage.

The Minnesotan has the requisite brick wall imagery. The wall shows cracks, but the good kind, like the kind that are shaped in the state of Minnesota, with a backdrop of the American flag. The top of the helmet reveals a snowy landscape with colors that invoke the Minnesota Wild. The chin includes Miska’s name in a rather menacing (and pretty cool looking) font.

Here’s a look at the other side.

The classic waving S logo is featured prominently to round out a pretty slick looking mask. It must be a thrill for Todd to design the masks for his son after doing it for some of the best in the business over the years.

There are few ways players get to show individuality in hockey, but the goalie mask does in the most fascinating fashion. It’s always interesting to see how that player’s individuality is reflected against the backdrop of national pride. Maybe that’s what makes national team masks so cool. Everyone celebrates their nationality differently, these guys just get to wear it on their face.