One of the more significant dates in USA Hockey’s more recent history is April 21, 2002. You might not know what happened that day, and there’s no need to be ashamed. Most people don’t.

A group of 16- and 17-year-old kids changed the course of USA Hockey forever that day in Piestany, Slovakia. That day, the U.S. National Under-18 Team, made up primarily of players born in 1984, defeated an Alex Ovechkin-led Team Russia 3-1 to win the first-ever gold medal for the U.S. at the IIHF World Under-18 Championship. The win also marked the first gold medal for any men’s U.S. National Team in an IIHF World Championship “A pool” event since 1933 (excluding the Olympics). 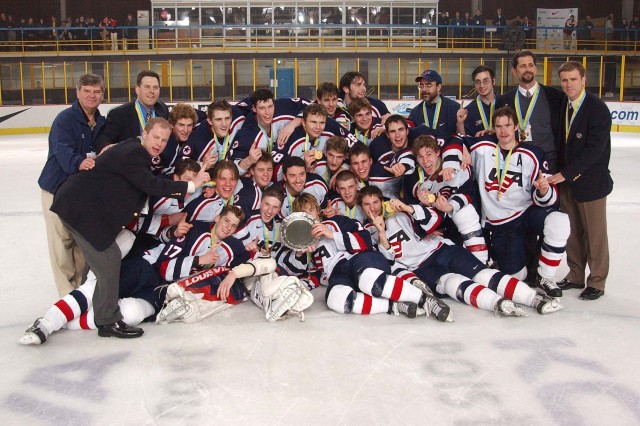 That win shifted the mindset of American-born players in international competition. Taking gold that year proved that the U.S. was developing elite hockey players — players that were good enough to compete with anyone from any country any time.

Two years later, with many of the same players from that 2002 U18 squad, the U.S. took its first ever gold at the World Junior Championship in 2004. That further cemented the belief that American hockey players were coming and the rest of the world had better take notice.

Since 2002, the U.S. has won a record six gold medals at the World Under-18 Championship and will aim for a seventh Sunday afternoon in the Czech Republic against Sweden.

Coming up after the jump, a look at where some of the players and coaches from that 2002 World U18 Championship team are now and what made them so important.

Prior to 2002, the U.S. hadn’t finished better than sixth place at the only four-year-old World Under-18 Championship. The National Team Development Program was in its sixth season and some were beginning to wonder if it was actually working.

Moderate success internationally in the preceding years calmed some of the doubt about the NTDP, but there were still many detractors (there still are, even today). The World U18 Championship quickly became the marquee event for the Ann Arbor-based program. It would be the measuring stick to gauge how it was developing players and preparing them for international competition.

Mike Eaves, in his second season as a head coach at the NTDP, was charged with leading the team to Slovakia and showing something. This 1984 age group had won the World Under-17 Challenge in Canada the year before, leading some to believe that they were on the cusp of getting over that hump.

There was another curve ball, however. The tournament’s format would be changed to include 12 nations (instead of 10) and would be decided via a double round-robin format (as opposed to a round-robin followed by a playoff round). Three teams from each of the two groups with the best records would move on to the medal round-robin, while the remaining three from each group would be sent to the relegation round-robin and play for the right to return the following year. The team with the best record at the end of the two round-robins would be the champion.  So… it was a really complicated format (there’s good reason it died after one year).

There was no single-elimination championship game to decide this thing. The U.S., which had lost to the Czech Republic in the second round-robin portion of the tournament, had to face undefeated Russia in the final game. A win gave the U.S. the same record as Russia and the Czech Republic, meaning a second tie-breaker would have to determine the champion. That tie-breaker was goal differential among the three (see? I told you it was complicated).

If the U.S. wanted to win the gold medal, it had to not only defeat Russia, but win by two goals.

The game started off perfectly for the U.S., jumping out to a 2-0 lead in the first period on a pair of goals by David Booth.

Then, in the third, Alex Ovechkin scored for the Russians to make it a 2-1 game and the championship was in doubt.

With Team USA’s gold-medal hopes, Zach Parise scored the first of what would be many big goals in a USA jersey, putting the U.S. up 3-1.

Jimmy Howard allowed just one goal to a Russian squad that scored in bunches throughout the tournament, including 36 in its first five games of the tournament, sealing the win for the United States.

That win’s impact is still felt today, and it allowed many of the players a great stepping stone to future success. Here’s a look at where some of Team USA’s standouts are today and how they fared in the tournament.

Zach Parise — One of four players to make the team from outside the NTDP, scored the big one that allowed the U.S. to skate away with gold. He scored seven goals and added three assists in Slovakia. Since then, Parise has become one of the finest American players in the NHL today with 410 points in 502 regular-season games. He serves as team captain for the New Jersey Devils. Parise also scored the game-tying goal at the 2010 Olympic Games in the dying seconds of the gold-medal game.

Patrick O’Sullivan — O’Sullivan’s NHL career hasn’t gone exactly as everyone expected, but he was the leading scorer for this U.S. squad with 15 points (8g-7a). He has 161 points in 343 career games in the NHL and spent a few games up with the Phoenix Coyotes this year.

Ryan Suter — One of the few under-age players on the roster, Suter was a stalwart defensively for Team USA. He was not on the ice for a single even-strength goal against in the tournament, finishing with a plus-13 rating to go along with seven points (1-6). Suter is an alternate captain for the Nashville Predators and is widely considered the best  active American defenseman in the game today. He was also a 2010 Olympian.

Ryan Kesler — Similar to how he plays now, Kesler was an important two-way forward for Team USA. He posted seven points in the tournament and was highly successful at the faceoff dot for the U.S. He’s now an alternate captain for the Vancouver Canucks and  has posted five consecutive years of 20 goals or more, including a 41-goal season last year. Kesler was an integral part of the 2010 U.S. Olympic Team.

Jimmy Howard — Team USA’s No. 1 goalie at the U18 Worlds, Howard had the big game against Russia, but was great throughout the tournament. Posting a 1.33 goals-against average and .954 save percentage, Howard was essentially lights out. In his third year as the full-time starter for the Detroit Red Wings, Howard posted a career-best 2.12 goals-against average and six shutouts. He should push for a spot on the 2014 Olympic squad.

Brett Sterling — With nine goals, Sterling was the leading goal-scorer for Team USA. At just 5-foot-7, Sterling hasn’t been able to stick in the NHL, but has seen action off and on in the top flight a few times. He put up cartoonishly good numbers at Colorado College and has been a stud at the AHL level as well.

Mark Stuart — Team USA’s captain was the first American to hoist the trophy at an IIHF championship since 1933. As a shutdown Dman for the U.S., Stuart logged a lot of ice. He’s now an alternate captain for the Winnipeg Jets and has been a full-time NHLer since 2007-08.

James Wisniewski — Now with the Columbus Blue Jackets, Wisniewski’s U18 World Championship ended rather unceremoniously as he was injured in the third game at the tournament. He was on his way to a heck of a tournament with a goal and two assists through the first three tilts. He’s been a full-time NHLer for seven years now.

Patrick Eaves — As the coach’s son, Eaves didn’t get any favoritism, but what he did get was 12 points, which tied Sterling for second on the squad. He scored 20 goals as a rookie for Ottawa in 2005-06 and has stayed in the NHL ever since. An injury cut his 2011-12 campaign with the Red Wings short, however.

David Booth — He only scored two goals in the tournament, but they couldn’t have been any bigger. Both came in that final game against Russia. Booth scored 31 goals in 2008-09, but hasn’t been the same since suffering a severe head injury after a blindside hit from Mike Richards the following year. Booth is currently with the Vancouver Canucks.

Other 2002 Players with NHL Experience

Corey Potter — Potter appeared in 62 games with the Edmonton Oilers this year.

Greg Moore — Has appeared in 10 NHL contests, but spent this past season in the DEL in Germany with Augsburg.

Nate Raduns — Appeared in one NHL game with Philadelphia in 2008-09, but has since retired from the game professionally.

Mike Eaves — Eaves, who led the U.S. to gold at both the 2002 World U18 and 2004 World Junior Championships, just completed his 10th year as head coach of the University of Wisconsin men’s ice hockey team. Eaves guided the Badgers to a national championship in 2006.

John Hynes — A young assistant coach at the time, Hynes later returned to the NTDP, guiding the U18 squad to the World U18 gold medal in 2006. After six years as a head coach in Ann Arbor, Hynes has since become the head coach at Wilkes-Barre/Scranton, AHL affiliate of the Pittsburgh Penguins. He was named AHL Coach of the Year for 2010-11.

Ken Martel — Martel is now the director of USA Hockey’s American Development Model, which is helping revolutionize the way youth hockey players are being developed in the United States. He works out of USA Hockey’s national office in Colorado Springs.

In Slovakia, there are two familiar staffers from that team in 2002.

Scott Monaghan has been with the NTDP since the beginning and is currently Senior Director of Operations for the Ann Arbor program. He is with the current U.S. Men’s National Under-18 Team in Brno, Czech Republic, as the team vies for its fourth straight gold and seventh overall.

Brock Bradley was in his first year as an equipment manager at the NTDP when the U.S. took gold in 2002, and is with the U18s again at this year’s event. This is the sixth World Men’s Under-18 Championship he has been a part of in that capacity. Bradley also served on the staff of the 2006 and 2010 gold-medal-winning U18 teams and 2010 U.S. National Junior Team that won the second gold at the World Juniors.

While it’s hard to put a lot of weight on teenagers themselves, what this group of kids did in 2002 had more significance than they were probably aware.

Without that first group setting the stage and bringing legitimacy to the NTDP and proving Americans could play on the world stage, who knows what would have happened. But they did set the stage. They did turn the tables and they gave USA Hockey a fresh outlook on where it was going to stack up with the rest of the world going forward.

On April 21, 2002, those American teenagers made a statement, and it’s still being heard today.

Team USA’s gold-medal bout with Sweden at the 2012 IIHF World Under-18 Championship will air live on FASTHockey.com starting at 10 a.m. EDT Sunday.