The 2012 World Junior Championship officially closed last night in thrilling fashion, as Sweden edged Russia, 1-0, in overtime to capture its first U20 gold medal since 1981. It was as exciting a 1-0 game as I’ve seen and it was a great way to end an extremely wacky tournament.

With the final placement set at the 2012 World Junior Championship, we now know the 2013 seeding.

The U.S. will play as part of Group B which includes Germany, Slovakia, Russia…. and… Canada. Three of the last four gold medal champions are part of this group. Can you say, “Group of Death?” Group A includes Sweden, Finland, the Czech Republic, Switzerland and Latvia. It should be another outstanding tournament in Ufa, Russia in 2013.

Now it’s time to turn back focus one last time at the U.S. National Junior Team that finished seventh place (my apologies for a lack of a Switzerland recap, there were a lot of other things to cover). A seventh-place finish is nothing short of an utter disappointment in the eyes of the Americans. Having medaled in the two years prior, no one could have predicted such an abysmal finish.

When it came right down to it, the players underperformed in successive games and you can’t afford to have more than one off night at the World Juniors. The U.S. never found its game. Plenty of blame to go around, but as the dust begins to settle, finger pointing won’t get anyone anywhere.

Coming up after the jump, an in-depth look at each of Team USA’s goaltenders and defensemen at the 2012 World Junior Championship.

The goaltending might take some of the blame for Team USA’s finish, but it’s unfair to put a large portion on Jack Campbell and John Gibson. Perhaps Campbell wasn’t himself, but perhaps it was also unfair to think he’d be able to sustain his otherworldly international success. He closed out a brilliant U20 career on a bit of a sour note, but he’s also the only goaltender to have collected two medals at the World Junior Championship in USA Hockey history. That said, it’s fair to have expected a little better than what was shown, but the same is true for the entire hockey team.

Jack Campbell — Campbell grabbed his record-breaking 10th career win at the World Junior Championship against Switzerland, though even Campbell admitted it was nice, but perhaps a little hollow coming in a seventh place game. Campbell ended the tournament with three wins and two losses. It’s hard to hang the Czech loss on him. At the World Junior Championship, we’ve come to expect Campbell to steal games, but the defense in front of him was a bit porous this time around. Too many quality chances at this level and it doesn’t matter who your goaltender is. It’s not the way Campbell wanted to end his career, but looking back at his accomplishments at the U20 level and below, he still has an impressive record.
Final Stat Line: 5 GP, 3-0-0-2, 2.62 GAA, .907 SV%

John Gibson — Unfortunately for Gibson, his tournament will be best remembered for his ill-time interference penalty against Finland. At that point, the U.S. had just seized momentum in the game, having recently tied it at one and currently on a power-play. With both teams skating four aside, Joel Armia took the lead for Finland and started what ended up being a three-goal period for the Finns. Gibson took responsibility for the loss, but he wasn’t alone in shouldering the blame for that one. Gibson never got another chance at redemption, though he may in 2013 in Ufa. Gibson is undoubtedly the Americans’ best option (at this point in time) for next year’s club. He’ll need to bounce back, and I’d imagine he will.
Final Stat Line: 1 GP, 0-0-0-1, 4.00 GAA, .852 SV%

Without Justin Faulk and Seth Jones, the defense went from being a strength to a potential weak spot before the tournament even started. Those fears were realized during the Finland game and continued right through the end of the preliminary round. As constructed, the defense should have been better than it was. Costly turnovers, bad penalties and several defensive-zone breakdowns will be what stands out as major issues for this U.S. National Junior Team. It wasn’t just the defense, as the forwards have plenty of blame on their shoulders as well, but it never felt like this defense found its way in the tournament.

Adam Clendening — At points Clendening showed flashes of what makes him a successful offensive defenceman, but more times that not he struggled with decision making and was prone for mistakes. There were several instances in which Clendening turned the puck over in all  zones. He ended up with five points and plus-2 rating, but the turnovers and the bad penalties will overshadow that. As the tournament wore on, Clendening found himself most frequently as Team USA’s fifth or sixth defenseman. I think Clendening will bounce back. He still has some excellent puck skills and gets pucks to the net (he had 15 shots on goal in the tourney). It was a bit of a down tournament for him.
Final Stat Line: 6 GP, 1-4–6, 6 PIM

Derek Forbort — Forbort got injured early in the game against the Czech Republic and, while he had a bit of a rough game against Finland, losing him really exposed Team USA’s lack of depth on the blue line. Prior to the injury, there were a few too many instances of poor decisions and getting beaten along the wall. Forbort was on the ice for two of Finland’s three third period goals and made a disastrous turnover on the first Armia goal. When LA selected Forbort in the first round, they knew they were getting a bit of a project. Forbort still has the tools of a first rounder, but he’s taking a while to reach his full potential. This tournament proved why he still needs some more seasoning.
Final Stat Line: 3 GP, 0-2–2, 0 PIM

Kevin Gravel — Gravel was Team USA’s seventh defenseman until Forbort’s injury forced him into more action. For the role that he was asked to play, I think Gravel actually performed admirably. He showed his tremendous skating ability and made solid decisions with the puck. He may not have made the team had Seth Jones not gone down with injury, but Gravel proved that he was capable at the World Junior level and that he belonged. Overall, I think Gravel played well when called upon and made the most of his ice time by just playing his own game and keeping things simple.
Final Stat Line: 6 GP, 1-0–1, 0 PIM

Stephen Johns — Throughout the tournament, Johns did what he was supposed to. Johns was brought onto the team to provide a physical presence that played the body any chance he got. Johns used to be a victim of stepping up at the wrong time and getting burned, but I saw few instances of that in this tournament. He had several big body checks that sent a message, but also played sound enough defense. His offensive game has vastly improved, as has his decision making. In his younger years, and even still sometimes, Johns has a penchant for taking penalties. That was not the case in Alberta. He only took one penalty the entire tournament. He wasn’t mistake-free, but he played well for most of the tournament and did what was asked of him.
Final Stat Line: 6 GP, 1-1–2, 2 PIM

Jon Merrill — Considering the fact that Jon Merrill hadn’t played a game since April prior to the tournament, he looked pretty good. He was good at supporting the transition with a good first past, made sound decisions (for the most part) in his own end and was able to create space and time for himself in tight situations. Merrill had a few costly turnovers in the touranment, most notably in the Czech game, but he was mostly good, not great. There were also a few instances of bad penalties, not often something you see out of Merrill either. Perhaps if he had some more game action under his belt, he wouldn’t have made as many of uncharacteristic errors, but he certainly wasn’t bad. Now he returns to Michigan and according to Michael Spath of The Woverine, Merrill still might not be cleared for game action for a bit.
Final Stat Line: 6 GP, 0-4–4, 6 PIM

Jarred Tinordi — Simply put, Tinordi was Team USA’s best defenseman at the tournament. Sure, that’s not saying a whole lot, but don’t take anything away from Tinordi, he had a pretty solid tournament. He made a lot of great decisions with the puck and proved that he can play a shutdown role wonderfully. At 6-7, he has great reach and a great defensive stick to go along with it. His worst mistakes at the tournament typically came via ill-timed penalties, but outside of that he was pretty solid. He didn’t punish anyone physically, but he made himself difficult to play against in his own end. Tinordi was named one of Team USA’s three best players and was extremely deserving.
Final Stat Line: 6 GP, 1-1–2, 6 PIM 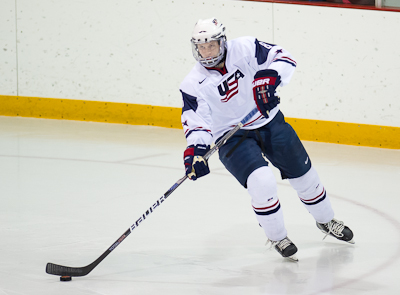 Jacob Trouba — Perhaps one of the bright spots for Team USA and a reason for some optimism for the future was the play of Trouba. Though the youngest player on the team, Trouba was the most physical. He proved that he’s a horse on the back end and can do things at both ends of the ice. He made some youthful errors throughout the tournament, but nothing beyond what you’d expect from a 17-year-old in a 19-year-old’s tournament. Despite a few miscues, Trouba impressed in the role he was asked to play. Trouba also acquitted himself well for his stock in the upcoming NHL Entry Draft. If there was any doubt he’s a top-10 candidate, there probably isn’t now.
Final Stat Line: 6 GP, 0-2–2, 0 PIM

The 2012 World Juniors was a forgettable one for USA Hockey, but they won’t forget about the lessons learned. The defense as a whole wasn’t bad, it just wasn’t good enough. It’s hard to pinpoint exactly what went wrong back there, but it will be thought about quite a bit over the next year in hopes it won’t happen again.

Coming later on USofH, a look at Team USA’s 13 forwards at the World Junior Championship.