It’s been a long time since a game between the United States and Canada meant so little. This was supposed to be a game that meant everything. Tickets were going for hundreds and some for thousands of dollars before the tournament started. After losing its last two games and Finland defeating Denmark in regulation Friday night, the U.S. is officially headed to the relegation round regardless of result tonight. 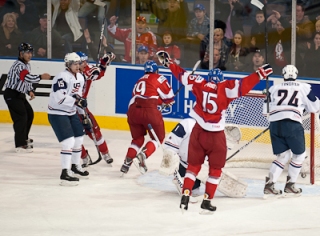 The shock likely hasn’t worn off for the players and staff. Still, there’s hockey to be played and tonight’s contest offers the U.S. its biggest rival. For Team USA, this game may not have much meaning in the standings, but it is the last significant game the U.S. will play. With two relegation-round games ahead, and Denmark facing a near impossible task of avoiding getting sent down to Division 1A, there’s not a whole lot to get excited about for the American players.

USA-Canada is always a spirited match-up. There is a genuine disdain for each other on both sides of this game. Canada will be looking to head into the medal round on a high note, while also hoping to pile on to Team USA’s already humiliating preliminary round. The U.S. look to take something positive out of the World Junior championship. In the end, this is Team USA’s championship game.

Coming up after the jump, a look at USA-Canada.

The U.S. National Junior Team lost Derek Forbort to injury early in the game against the Czech Republic.  Forbort went awkwardly into the boards, knee first, and appeared to be in quite a bit of discomfort. He was essentially carried to the locker room and it didn’t look pretty.

Neate Sager of Buzzing the Net tweeted that Forbort will not play against Team Canada tonight. 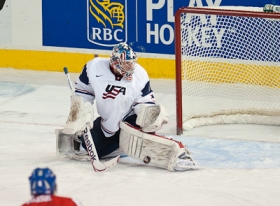 Sager also tweeted that Blais has not decided on a starting goaltender for tonight’s contest against Canada. For the record, John Gibson has never lost to a Canadian national team, having defeated Canadian squads at both the U17 Challenge and U18 Championship.

One also has to wonder about the mental state of both goaltenders, who are likely to shoulder some of the blame for the defeats of the last two days. Last night, Blais said this to Mike Morreale about Jack Campbell:

“Jack is feeling really bad, obviously, because he’s used to medals and it looks like he won’t be leaving here with one this year.”

For goaltenders, the mental aspects are often just as important the physical skills. A confidence-shattering loss to the Czechs is a tough pill to swallow for any goalie.

We’ll see if Blais gives the youngster Gibson a crack at Canada or if he goes with the veteran Campbell.

Charlie Coyle was also sick last night. Blais mentioned that he wasn’t sure the forward would be able to go for Team USA against Canada. Not having Coyle was noticeable last night. His two-way abilities and his size could have helped if he was at 100 percent.

Being without Derek Forbort and a less-than-healthy Charlie Coyle is some serious attrition to contend with against a very strong Team Canada.

The U.S. and Canada have met at least once each WJC since 2003. They have met in important preliminary and medal-round games in that span, and only twice the U.S. has come out on top. Both of those wins came in gold-medal games.

Last night, U.S. captain said “We’ll beat them,” during his post-game remarks and it was written everywhere that he was guaranteeing victory. Zucker later tweeted the following:

In no way did I ever “guarantee” a win tomorrow night. I said “USA is approaching the game as if we are going to win” like we always do #usa 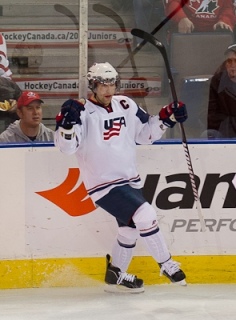 It’s probably good that Zucker clarified what he meant, but either way, it’s already out there that he guaranteed a victory. He may not have meant what he said in the context you’d gather from reading it.

Of course that quote was going to be highlighted by every major media outlet. It adds a little drama to a fairly drama-less game.

This game still has to mean something as far as media and TV broadcasts are concerned, even though it really doesn’t.

This also probably gives a Canadian team with its fate already decided a little extra motivation. If there’s one thing I’ve learned about Canadian national teams, they will take anything that can potentially motivate them and use it.

There’s no question that Canada is coming into this game with the hope of demoralizing the U.S. It’ll be up to Team USA to at least show up tonight and play with the pride that was taken away a bit in the last two games.

Still, the U.S. team is almost in a no-win situation. A loss only exacerbates the humiliation, while a win would only provide frustration, causing fans to wonder how the U.S. could be Canada, but lose to Finland and the Czech Republic. It’s a too little, too late situation for Team USA, but that doesn’t mean they’ll just lay down. There is some amount of pride to be played for.

To give you a quick look at Canada: Its stacked roster has had little trouble so far, rolling past Finland, Denmark and the Czech Republic by a combined score of 23-2. Three players have seven points for Canada including leading goal scorer Mark Stone (6g-1a), leading assist man Jonathan Huberdeau (1g-6a) and Isles first-rounder Ryan Strome (3g-4a).

Canada does have a bit of a goaltending controversy, as Scott Wedgewood and Mark Visentin have traded duties. Visentin, last year’s goaltender, has two starts, while Wedgewood impressed in shutting out the Czechs. It will be Wedgewood getting the start tonight against the U.S., as Bob McKenzie reports.

The U.S. will have to contend with Canada’s relentless forecheck, good team speed and physical play. Canada will try and intimidate the U.S. from the drop of the puck.

Canada will capitalize on any and every mistake with a litany of skill players at the forward position.

The other story that is at least somewhat intriguing and will be talked about way more than it probably should, is that Jamie Oleksiak was a candidate for last year’s U.S. National Junior Team and was cut. He now plays for Canada.

Oleksiak was born in Canada, but played the majority of his developmental hockey in the U.S. He was part of the Little Caesar’s youth hockey program in Michigan, played in the United States Hockey League, skated at the Memorial of Ivan Hlinka for the U.S. and became a first-round draft pick at Northeastern University.

After going in the first round to Dallas, Oleksiak later announced he would play for Canada, not the U.S., in this year’s World Junior Championship. A short time later, he left school to join the Saginaw Spirit in the Ontario Hockey League. So expect to hear about that a lot tonight.

While there are plenty of story lines for tonight’s game, it’s just hard to believe that a potential rematch in the medal round won’t be one of them.

Chris Dilks takes a look at what went wrong for the U.S. for Western College Hockey Blog.

Bruce Peter takes a look at USA’s shocking fall to the relegation round for Puck Worlds.

I’ll be joining the Drop the Puck radio program on WHTK in Rochester, N.Y. to talk about the World Juniors Sunday morning at 10:15 EST.