Team USA is looking for its third consecutive medal at the World Juniors, but in order to achieve that, it has to get through a challenging preliminary round. It all starts tonight. The United States will open the World Junior Championship against Denmark at 8 p.m. EST live on NHL Network and streaming live on NHL.com.

Denmark isn’t exactly a strong opponent but they’re still one of the 10 best U20 teams in the IIHF this year. Not to slight the Danes, but this is a game in which the U.S. should be able to focus on itself and what they do. The U.S. has gotten some good momentum heading into the tournament with a strong performance in its last pre-tournament game, a 5-0 win over Slovakia. That was the first game with the final roster in place.

The goal for the Americans is to get better every game in the tournament and that was certainly the case during the pre-tournament competition. That needs to carry over, and it has to start against Denmark.

For a complete pre-game preview, it’s all after the jump.

The U.S. National Junior Team is likely to have a full lineup tonight. Nick Bjugstad missed all of the pre-tournament games with an injury, but had a full practice, in which he was not limited by a no-contact jersey, for the first time yesterday. He is expected to be on the ice tonight. Josh Archibald also sat in the last preseason contest after getting nicked up in a practice, but it appears he’ll play tonight.

The lines as they were drawn up in the exhibition game against Slovakia are not likely to remain intact, with the exception of one.

The line of Jason Zucker, Charlie Coyle and Brandon Saad has flat-out dominated when it has been together.  This is probably going to be Team USA’s scoring line 1A, with whatever line Bjugstad is playing on as scoring line 1B, if you want to put labels on it.

Bjugstad returning to the lineup changes the entire dynamic of what the U.S. will be capable of offensively. He is a game-changing player and has been all year at the University of Minnesota. With him healthy and skating, it’s going to be a tough top three lines to stop. 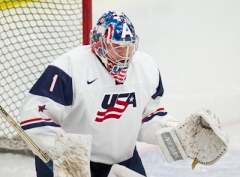 I haven’t gotten word on who will be between the pipes tonight, but if Jack Campbell is the go-to guy for the tournament as everyone assumes, he’ll probably at least start the game. Last year, Campbell played all, but about nine minutes of Team USA’s games. He’s a well conditioned goaltender who doesn’t tire easily. They might just ride him the whole way, unless he struggles. John Gibson might get some garbage time to stay sharp, but either way, he’s a mentally tough goalie who will be ready when/if needed.

Denmark is not going to have any hope of matching Team USA’s speed. It will also be tough to out-hit the Americans. The U.S. will need to establish both the speed and physicality of the game immediately. If it’s a fast start for the Americans, it could be all over within the first 10 minutes of the game.

Denmark has some decent skill players up front, led by Nicklas Jensen, but it’s going to be tough to maintain possession against such a relentless U.S. attack.

I wouldn’t anticipate Team USA spending too much time on systems or set plays. They’ll just go out there and play the game the way they are able. Fast, hard, and fun hockey.

Against Slovakia in the exhibition, Team USA was still rotating through players on the PK, so it will be interesting to see if they have any set units out there tonight.

A team that plays as fast as the U.S. can expect to find themselves on the power play a few times as that speed will draw penalties. Will Team USA show their units on the PP or just roll lines? That will likely depend on the score and how the U.S. feels about their top power play guys. In the exhibition, the U.S. often went with four forwards and one defenseman with the man advantage. Blais had talked about trying that out and that may end up being what we see with a limited number of offensively gifted defensemen.

The main thing the U.S. has to focus on tonight is continuing to get that team unit clicking. This is a tournament in which teams have to come together fast. There’s a max of seven games played in this tournament, meaning there’s a really short amount of time to click. The teams that come together fastest have most success, pure and simple. That’s what happened in 2010 when the U.S. won, and it will have to happen again.

A lot of that responsibility to help facilitate that coming together will rest on the captains. Strong leadership was often cited by Dean Blais and USA Hockey staff as a factor in that 2010 team’s success. Captain Jason Zucker will have to help play a similar role, as Derek Stepan did two years ago, having been part of that 2010 team. He knows what it takes to have success and has seen the difference between a gold-medal team and a bronze-medal team.

Look for a fast start out of the Americans tonight as the excitement of playing the first game of the tournament should lead to some good jump. It’s important to get all of the nerves out of the way and get down to business quickly. Overlooking Denmark is ill-advised. More importantly, however, getting into a good rhythm to start the tournament is key. Team USA has to set the right tone out of the gate.

Expect a great effort out of Team USA and if there’s that, the goals will come and so should a sizable win.

NHL.com is streaming a good portion of the games that will air on NHL Network, including every U.S. National Junior Team game throughout the tournament. Oh yeah, and it’s free. That means this is the most accessible World Junior Championship in American history. Not too shabby. Here’s the complete streaming schedule via USA Hockey.

USA Hockey has game notes and more on its USA-Denmark Gameday Central page.

Jacob Trouba has been doing a blog for NHL.com’s Draft site and shared his insights on making the U.S. National Junior Team.

I answered a few questions for Bruce Peter over at Puck Worlds for his Team USA preview, but Bruce is one of the better guys covering this tournament.

The Hockey Writers has a pair of good hockey folks covering this World Junior Championship. Check out their coverage here.

ScoreMobile, the popular smart phone app, is covering the World Juniors this year with live scoring. I can’t link to it, but I did a USA Q&A with Adam Sarson for their news side of the app.

Either later tonight or early tomorrow morning, I’ll have a full recap of Team USA’s opening-night game against Denmark, with in-depth analysis and more. I’ll also be answering questions on Twitter from now through the game. Hope you’ll join the conversation.