While the U.S. probably could say goaltending is its strongest asset, the forward group is certainly going to be a big positive for the U.S. There is a ton of speed and skill, with good scoring depth.

Speed is the key word in there. That’s what this team will be. Call it a cornerstone, or a hallmark. The team speed up front was of paramount importance when selecting this team. Not only will players have to skate with speed, they’ll have to play with speed. Quick decisions, quick passes, read, react, score.

Last year’s U.S. team struggled to score consistently, but this year’s group shouldn’t find that to be as problematic. With four returning players up front and a wide variety of skill sets throughout the forward line up, Team USA should be a very fun team to watch.

Coming up after the jump, a look at each of Team USA’s 13 forwards…

Josh Archibald — Brainerd, Minn. — This guy came out of nowhere to earn a spot on the team. He wasn’t on anyone’s radar, but after a solid camp, his selection is justified. Archibald plays for Dean Blais at Nebraska-Omaha and clearly the head coach saw something in his own guy that warranted inclusion. I’ve never seen Archibald myself, but I’m told he is a very strong skater, plays a physical game and can fill any role.  His aggressive style will be welcome. I’d expect him to be in that 13th forward kind of role, where he’s available for any line. 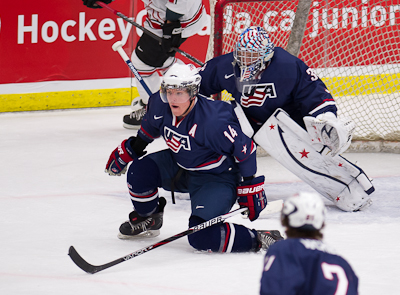 Bill Arnold — Needham, Mass. — Arnold plays with a lot of energy and he can put the puck in the net. With Charlie Coyle and Nick Bjugstad locking down the top two center positions, Arnold gives great depth at that position. He can also play wing if necessary. Arnold can play a grind-it-out style when needed and has the strength to make him difficult to play against. He has a tremendous shot that is both accurate and heavy. Arnold has some of those qualities that won’t always get noticed, but will be effective.

Nick Bjugstad — Blaine, Minn. — Held out from both exhibitions and wearing a no-contact jersey in practice didn’t keep the returning center off of Team USA’s roster. I’m told he’s on track to play and his injury won’t limit him much further. It’s a good thing too, because Bjugstad has potential to be Team USA’s top forward. Coming into the tournament, he is one of the nation’s leading scorers. After a summer committed to building strength, Bjugstad has become a physical presence in every game he plays and he can skate. As long as he’s in top form, he could produce at a pretty high clip for the U.S. in Alberta.

Connor Brickley — Everett, Mass. — Toughness, grit, edginess, whatever it is you want to call it, Brickley’s got that and more. He’ll be one of Team USA’s most ferocious forecheckers and an open-ice nightmare for someone with their head down. The best thing about Brickley is his fearlessness. No matter the situation, his game never changes. It’s all out, all the time. He’s not reckless, either. Don’t sleep on Brickley’s skill. While not particularly high end, it can sneak up on unsuspecting opponents.

Charlie Coyle — East Weymouth, Mass. — Arguably Team USA’s best forward at the last World Junior Championship, Coyle will return with much higher expectations. While he has good offensive ability, Coyle’s true value is in his two-way game. He gets the job done at both ends at a high level. For that reason, I’d expect Coyle to see more ice than any American forward. 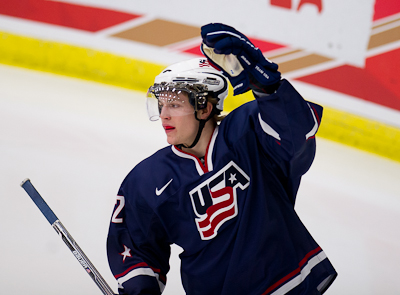 Emerson Etem — Long Beach, Calif. — Eyes will be on Emerson Etem all tournament long. As a returning player from last year’s club, he’s one of the best players in Junior hockey right now. Last year, the goal scorer mustered one tally in Buffalo. Blais’ system is perfect for Etem to have success, though. He has great wheels and finish. Expect him to get plenty of looks. This could be a very revealing tournament for Etem, where he can show us exactly what he is and what he can be.

J.T. Miller — East Palestine, Ohio — There is one forward on this team that wasn’t born in 1992 and that is J.T. Miller. The Rangers first rounder has impressed from the moment his name was called on draft day. He plays with speed and power. Unafraid of physical contact, Miller gets to the hard areas of the ice and makes plays. He was the best forward at the 2011 Under-18 World Championship and that international success should carry up to the next level. He’s probably going to have his role on the team fleshed out a bit more in the coming days, but he’ll be contributing component for sure.

Kyle Rau — Eden Prairie, Minn. — The hero of last year’s Minnesota state championship brings versatility and tenacity to this lineup. He has the ability to score goals, particularly important ones and has been dynamite in his freshman season at Minnesota. Rau has a chance to bring that scoring ability to the lineup and could slot just about anywhere. Expect him to play with some guys that are going to give him space to move. His competitiveness will be a big factor in his success.

Brandon Saad — Gibsonia, Pa. — Saad’s five-point performance in Wednesday night’s exhibition against Switzerland dashed any doubts that he was still suffering from rust after about a month off from injury. Saad at his best is dominant. He should be able to produce in a big way for this team. He skates not only with speed, but tremendous power. Saad has terrific finish around the net. He’s the only player on this roster with NHL experience, having played two games with the Blackhawks at the beginning of the year. I expect him to play a gigantic role on this team offensively.

T.J. Tynan — Orland Park, Ill. — This pick was hardly a surprise to anyone that’s been paying attention to what Tynan has done at Notre Dame over the last two years. He might be small, but boy can he play. He’s a good all-around player, but has a keen ability to put up points in bunches. Tynan’s skating ability vastly improved during his time at Notre Dame and he’s turned it into a strength. Effective in all areas of the ice, he’ll be a very reliable forward for Dean Blais. 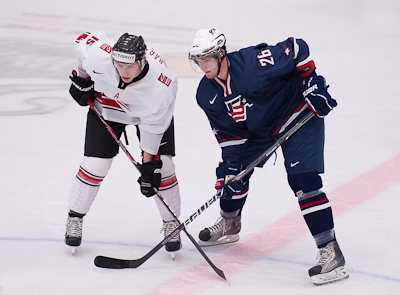 Austin Watson — Ann Arbor, Mich. — Watson is another one of these center/wing hybrid guys that Team USA has brought on (Arnold, Tynan and Czarnik can also play at both positions, by design). Because of that versatility, it allows Team USA to try Watson in a variety of roles. He’s incredibly responsible defensively and on the penalty kill. A shot-blocking machine, Watson does a lot of small things well, particularly the small things that help a team win. He might get limited ice, but expect him to play effective, efficient minutes.

Jason Zucker — Las Vegas, Nev. — Dean Blais loves this kid, and so does just about everybody who watches him play. The guys he plays against? Well, yeah… they hate him. Zucker flies, he hits, he scores. He’ll talk a little trash here and there. Whatever edge Zucker can get, he finds it. That’s why he’s going to be a successful player at this tournament and beyond. It takes a special player to play in the World Juniors three times. Zucker fits that description pretty darn well. This could be a monster tournament for him.

The U.S. has so many weapons at its disposal within this forward group. Roles are still being fleshed out, as some players may have to adapt to a style of play they’re not familiar with. No matter what the final lineup is for Team USA, it will be an incredibly exciting group to watch.

Coming up later today, snippets from my conversation with Tim Taylor, Team USA’s director of player personnel. Taylor talked about the evaluation process for selecting this team and gave me some insight into certain players. He’s one of the brightest hockey minds out there, folks. You won’t want to miss what he has to say.