Throughout the week, I’ll have posts on each of the teams playing in the 2011 NCAA Frozen Four. There is plenty of quality FF coverage across the internet, but I’ll try and give you something just a little different. 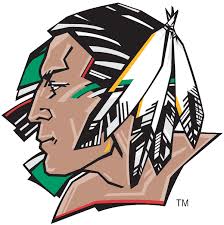 It’s no secret that the University of North Dakota Fighting Sioux are the favorites to win the whole thing. As the last remaining No. 1 seed from the regionals, why shouldn’t they be? For much of the season, the Sioux have been the top-ranked team in college hockey and possess Hobey Baker favorite Matt Frattin.

On Thursday, in primetime no less (8:30 p.m. ET), North Dakota will meet fellow college hockey power Michigan on ESPN2 (or “The Deuce” if you think it sounds cooler… it doesn’t). As I mentioned in my preview of the Wolverines Tuesday, this has a chance to be a fantastic showcase for college hockey. I don’t expect either of these teams to disappoint.

Coach Dave Hakstol has a veteran-laden, skilled and gritty team. Coming up after the jump, a look at what stands out to me about this Fighting Sioux hockey team.

NHL in the NCAA

There are few teams that play a more pro-style brand of hockey than North Dakota. It’s no wonder that the Fighting Sioux have produced more and more NHL talent over the last several years. Names like Toews and Parise instantly come to mind as the elite talents that have come through Grand Forks.

The Fighting Sioux have more NHL Draft picks than any of the other three teams competing in the Frozen Four with 16.

As I mentioned in yesterday’s post about Michigan, NHL teams are more than happy to let their prospects develop in Ann Arbor. They are just as willing, if not more willing, to let their players grow at North Dakota.

Dave Hakstol has become not only a solid college hockey coach, but a developer of elite talent. That’s a valuable commodity in college hockey today, with the competition from the Canadian Hockey League teams. The competition for players is at a fever pitch. NCAA teams have to compete with each other and then worry about Major Junior defections. So when a school continually proves that the best players will have as good or a better chance at making the NHL by playing there, it’s big for college hockey as a whole.

The one thing about North Dakota is that they rarely lose a recruit to the major junior ranks. Why? Toews. Parise. Oshie. Stafford. Elite players come to North Dakota and they leave prepared for the NHL.

I hate to sound like a recruiter for North Dakota, but programs like theirs are keeping college hockey alive and well in the battle for pro prospects. Other programs like Michigan, Boston College, Boston University and Miami are the same way.

Whether you love the Sioux or hate them, you have to respect the job they’ve done with player development over the last decade.

A little bit later in the post is a complete list of the draftees on North Dakota’s roster.

The Fighting Sioux have such a star-studded cast, but I’ve picked out Derek Forbort to highlight for the simple fact that he is the highest-drafted player playing in the NCAA Frozen Four.

The Kings selected Forbort with the 15th overall pick in the 2010 NHL Entry Draft after his standout season at the National Team Development Program. With his size and abilities it was no surprise to see Forbort earn a mid-first-round selection.

With the first-round pedigree and the high expectations, Forbort should be a player many hockey fans are keeping an eye on Thursday night. He might not wow you right away, but it’s easy to see why scouts were excited about his future. He might be a bit of a longer-term prospect in that he has areas that need work, but his ceiling is as high as anybody’s.

When reports came out that Danny Kristo had frostbite and was at risk of losing some toes, I think shock kind of took over. What a crazy story, right? I had initially joked that it was one of the perils of going to school in Grand Forks, N.D., but when the gravity of the situation hit, I think everyone was instantly concerned. Kristo is a young player with a bright future.

Kristo had struggled this year, but as Brad Schlossman wrote, the sophomore forward was just beginning to find his touch before the frostbite incident. Now that Kristo has rehabbed fully (after six weeks on the shelf) and is back on the ice, it’s looked as if he hasn’t missed a beat.

When he’s at the top of his game, Kristo can be a lot of fun to watch, as he was for Team USA at the 2010 World Junior Championship. On his best shift, his speed and skill can blow you away.

Despite his frostbite setback, it looks like Kristo is ready to take his game to a higher level. He’ll have a great opportunity to prove that this week.

I think one of the best stories about the University of North Dakota is the fact that it’s senior class came in together and will go out together. It is so rare in college hockey that a class will have every member go all four years without an early pro departure, or a transfer or a kid getting cut. There are just so many things that can go “wrong” over the course of four years. In fact, as Brad Schlossman wrote in his blog a while back, this is the first class in North Dakota history to stay in tact for all four years.

So the fact that Matt Frattin, Derrick LaPoint, Brent Davidson, Evan Trupp, Brad Malone and Jake Marto (along with adopted classmate Chay Genoway who was granted a fifth year with a medical red shirt) are all leaving the Sioux hockey program together is nothing short of remarkable.

For more news and notes on Frozen Four participants, be sure to check out College Hockey, Inc.’s website.

Well, that will do it for the Frozen Four team previews. Thursday should be a great day for hockey in St. Paul. The lights will shine bright on college hockey and it’s a big chance to make some new fans and entertain the current ones.

There’s almost always a surprise twist or two in Frozen Four play, which makes for great sports theater. If you’re a hockey fan, but haven’t warmed up to the college game yet, make sure to tune in to ESPN2 Thursday and just kick back and enjoy the show.