As you might have seen yesterday, there is a big international tournament going on over in the Czech Republic featuring many 2011 NHL Draft eligible players. Outside of the World U18 Championship, the Under-18 Five Nations might be the next most important scouting event in international hockey (including the Ivan Hlinka). Today’s post takes a look at which U.S. players (not named Biggs, Miller or Grimaldi) fans should be keeping a close eye on throughout this tournament.

The Five Nations features the best players from Finland, the Czech Republic, Russia, Sweden and the United States. It is a great preview for the  Under-18 World Championship which takes place in Germany this April.

The U.S. has already played two of the top teams at the event in Sweden and Russia and soundly defeated both. On Wednesday, Team USA earned a 6-2 win over Sweden and earlier today trounced Russia 10-4 (which included a five-goal second period for the U.S.).

Not surprisingly, Rocco Grimaldi has been leading the offensive charge, but today’s match-up against Russia was a good one for a number of American 2011 Draft eligibles.

However, it is important to note the players that perhaps the likes of Grimaldi, Tyler Biggs, J.T. Miller and John Gibson tend to overshadow at the NTDP. There’s a lot of growing talent on this U.S. roster and some are making their presence known at the Five Nations.

Coming up after the jump, a look at some of the U.S. players to watch the rest of this week at the 2011 Under-18 Five Nations Cup.

Reid Boucher continues to defy his mid-term draft ranking by racking up points. Central Scouting has him listed at No. 206, the lowest of any NTDP player. I thought it was ridiculous then, and I think it’s even more ridiculous now. He’s second at the Five Nations for the U.S. with six points (2g-4a). He’s also second on the U.S. National Under-18 Team with 36 points (17-19) in 41 games played this season. Ron Rolston, his coach, once told me he thought Boucher is perhaps the most natural goal scorer on the team. Playing against tougher competition than his NTDP predecessors, Boucher’s numbers aren’t eye-popping, but you can see his talent. He has a deadly release and can score from all over the ice. He’s not afraid to go to the net and make a play. I don’t think Boucher is a top-three round pick, but he’s certainly not a bottom-two round pick. Not by a long shot.

This Five Nations Cup is a very important tournament for Robbie Russo. Prior to this season, some thought he might be the best American defenseman in his age group and a bona fide first-round pick, however he’s continued to slide down lists. Ranked by Central Scouting at No. 72, Russo, who has great offensive instincts has not put up the numbers expected of him. At the Five Nations, he leads Team USA’s blue liners with three points, all assists. He’s a fine distributor of the puck and possesses a very good shot. While he may no longer be considered the best defenseman in the U.S., he’s certainly still a guy with tremendous upside. Even though his stock has fallen, he’ll still make a great pick in the second or early third round.

A guy that often gets lost in the shuffle a lot is Blake Pietila. He has three points (2-1) at the Five Nations Cup and plays a brand of hockey that I really enjoy. He’s not going to put up points on a nightly basis, but he’s a strong kid who is tough to play against. He’s ranked at 112 by Central Scouting which is right about where you’d put a guy like him. He’s not going to turn heads, but he gives any team added depth and a hard worker. Despite offers from some big-time schools, he chose to commit to Northern Michigan University, but later switched to Michigan Tech University to play with older brother Chad, who recently transfered from NMU to MTU. He’ll be out of the spotlight, but playing against the tough competition in the WCHA should continue to harden him. 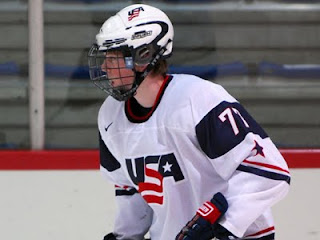 Another huge positive for the U.S. team is the return of Connor Murphy, son of former NHLer and current Panthers assistant Gord Murphy,who is a big defenseman with loads of talent. He’s played in only two games prior to the Five Nations Cup, but notched an assist in today’s win over Russia. After being arguably Team USA’s best defenseman (and captain) at the 2010 Memorial of Ivan Hlinka, Murphy found himself shelved for months with an upper-body injury. His bad luck with injuries has derailed each of his last three seasons. Despite all that, he remains on the radar screens of scouts across the NHL. His size (6-3, 192) and talent, in spite of missing so much time, really stands out. Central Scouting obviously had to list him as a “Limited Viewing.” If he remains healthy and is able to play in the World Under-18s, watch his draft stock soar. His injury troubles may keep him out of the first few rounds, but whoever gets him has a talented young hockey player. For Murphy’s sake, let’s hope he stays healthy.

Michael Paliotta might be one of the most improved players for the U.S. He struggled to find his way last year with the U17s in the USHL, but has made a name for himself this season. Ranked by Central Scouting at No. 32, he’s surpassed Russo in the eyes of scouts. Another big factor is Paliotta’s size. At 6’3″, 196, he’s continued to build strength. He’s not a physical force, but he’s tough to get around. The fact that he has continually improved and honed his game has to be attractive to scouts. By no means a finished product, Paliotta will be challenged on a nightly basis in a speedy Hockey East with the University of Vermont next year. If he is up to that challenge, he’s only going to get better and better. He’s an intriguing prospect and one to keep a very close eye on even after he’s drafted.

A few other players to keep track of at the Five Nations:

Cole Bardreau, ranked at No. 204 by Central Scouting, is off to a hot start with four points (2-2) through the first two games, including a two-goal, one-assist effort against Russia.

Ryan Haggerty, who was not ranked by Central Scouting, had a big day today with a goal and two assists against Russia. He’s a player that is going to have to work his way into the draft, but he has that ability.

The guys you know about:

Tyler Biggs, the top-ranked NTDP player on the Central Scouting list at No. 5, potted two goals against Russia today. He’s a force on the ice regardless of opponent. No surprise there.

J.T. Miller, has two points with a goal on Tuesday and an assist today. Central Scouting has him slotted at No. 13. Could have some big games against CZE and FIN.

John Gibson, Central Scouting’s No. 1 ranked North American goaltender, was between the pipes for the 6-2 win over Sweden. Shots/saves were not available.

The tournament concludes on Feb. 13. The team with the best record at the end of the tournament wins, and at 2-0-0-0, the U.S. is firmly in the driver’s seat in that regard. Team USA takes on host Czech Republic tomorrow at noon EST in a game that will be shown on national TV in the Czech. The U.S. closes tournament play on Feb. 13 with Finland.

We’ll have a full tournament update on Monday, as well as our normal prospect updates on Tuesday and Thursday of next week. Expect plenty of content next week as we gear up for Hockey Weekend Across America (Feb. 18-20), as well.