This Should Be Fun Part II

The battles being waged in Part I might be the best thing about paying close attention to the U.S. pre-tournament camp, however some of the players I’m most excited to see are the guys I feel have the best chance at making the roster.

Of the 11 forwards that are new to the World Juniors, I feel like there are only four that are sure bets to be one of the (we assume) 13 forwards on this U.S. squad. Making the battles in the previous post that more challenging.

So here are the guys I really like for this year’s team and feel strongly they can’t be left off:

DREW SHORE – University of Denver – Shore is at an advantage because he’s a center in a camp that is rife with wingers. The other advantage? His team-leading 25 points in 20 games, while playing in the highly competitive WCHA. He’s tied for fourth in the nation in points and tied for third (with Denver teammate and World Juniors returnee Jason Zucker) with 14 goals. After a disappointing freshman season, Shore has looked every bit as good as was previously expected when Florida took him in the second round in 2009. Another advantage, Shore has played with guys like Jeremy Morin, Jerry D’Amigo, Zucker and Kyle Palmieri in the past at the NTDP and at the 2009 World Under-18 Championship. He’ll have a good feel for those guys and use his stellar play-making ability to set the table. You can’t argue with the stats in this case, or the size (6-2, 200). He’s as close to a lock as there is.

CHARLIE COYLE – Boston University – Coyle is another big forward who is having a solid freshman year. A graduate of the Eastern Junior Hockey League, Coyle hasn’t missed a beat for BU, posting 14 points in 17 games. He’s got excellent size (6-2, 207) and gives the U.S. a guy who can power down the right side and drive pucks to the net. He skated in a few international competitions last year with the U.S. Under-18 Team, so he’s seen the international game. Coyle also comes with a first-round pedigree and a quiet confidence. I think Coyle doesn’t have to be in your top six to be successful, but could step up into a role like that if necessary. His size and skill make him just too hard to cut.

BRANDON SAAD – Saginaw Spirit (OHL) – I’ve seen Saad play for the last two years and I am constantly amazed by his strength and nose for the net. He’s a power-forward through and through, coming in at 6-2, 211. However, his skill set is really special. Those combinations, along with his sparkling stat line (33GP, 20-16–36, +13, 8 PPG, 2 SHG) should make the U.S. coaches incredibly happy. When he skates and plays his hardest, he’s dominant. However, I have seen instances where his game slipped just a bit. As long as he avoids that, and I’d fully expect him to, he’s a big contributor for this team. Saad has had success at the international level, winning gold with the U.S. National Under-18 Team last year in Belarus, as well. He’s by all accounts a great teammate. If he’s not a top five pick in this year’s NHL draft, I’ll be shocked. I’ll be more shocked if he doesn’t make this team. 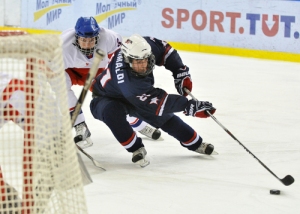 ROCCO GRIMALDI – U.S. National Under-18 Team (NTDP/USHL) – Let’s get this out of the way quick: He’s 5-6, 161. SO. WHAT. This kid has done nothing but produce at every level he’s ever played. He’s been playing against older kids his entire life and has been dominant. Grimaldi’s perhaps one of the most electrifying talents in this year’s draft and he’s potentially one of the most dynamic players to play at the National Team Development Program (watch out, Kane and Kessel). He was called up to the U.S. Under-18s last year in February and just produced points. At the World Under-18 Championship, Grimaldi tied for the U.S. lead with 10 points. He led all under-age players in the tournament and yes, he’s 5-6, 161. When you get 13 forwards, you can’t afford to leave a guy like Grimaldi off. This is a whole new level, but every time he’s been put at a new level, he’s succeeded. Who or what is going to stop him now?  He’s got a laundry list of accomplishments, that I’ll just link to for the sake of my fingers, so just click here, will ya? He’s just four points shy of reaching 100 in his NTDP career and there’s still half a season left. I am a Rocco Grimaldi fan, plain and simple. It’s time for the rest of the world to join in.

So there you have it. Four guys that I really hope to see in the U.S. red, white and blue in Buffalo. I have decided to hold off on making my official predictions regarding the complete lineup until I get a chance to gauge how the camp is going. There’s always a surprise or two, so its tough to make the call before these guys hit the ice next week. However, I’d love to see your predictions. So leave them in the comments if you’re so inclined.

Also, be sure to follow USAHockey’s coverage of the camp here and here. They did a great job last year and I’d expect even better on home soil.

Quick note: Huge thanks to Norman Hayward for designing our new title banner. You can check out his awesome photography at bigmanwithacamera.com