2017 World Juniors: USA vs. Russia Semifinal Preview — Learning from the past

For the fourth straight World Junior Championship, Russia stands in the way of the U.S. on their road to a fourth gold medal. Team USA will hope that history does not repeat itself Wednesday as they take on their biggest European rival in the semifinal at 3 p.m. ET on NHL Network.

In each of the previous three World Juniors, Russia has ended the Americans’ golden dreams rather unceremoniously. In fact, no U.S. team has ever beaten Russia when the two have met in the medal round.

While it is a dubious history, this U.S. team has been thumbing its nose at long droughts and what the record books say. They ended a five-game skid against Russia in the preliminary round, handing the U.S. its first win over the Russians since 2008. They also beat Canada on New Year’s Eve for the first time since 1998. This coaching staff and these players have had the right approach when it comes to the past. They had nothing to do with those other years and can only focus on what they’re supposed to do.

One way the recent past has come up to bite them a little bit is that it has created the toughest possible route to the gold-medal game thanks to how the previous year’s seeding shook out. After playing Russia and Canada in the prelims, there’s a chance they’ll have to play both again for a shot at gold, depending on the results of the semifinals as Group A was far weaker than Group B.

Beating a team twice in the same tournament has proven next to impossible.

There have been five of these "rematch" games in four prior WJCs and only once has a team won both the round-robin and playoff game.

That is one of the challenges the U.S. faces today.

On top of that, the Americans got all they could handle out of a Swiss team that put a real scare into the U.S. in the quarterfinals. In the end, that scare may have been just what the U.S. needed after not really struggling much at all in the preliminary round.

1. The first few minutes will tell us a lot about the game

Coming off of one of their worst performances of the tournament, it will be important for the U.S. to have a good start. Getting back to what had worked for them in their last two preliminary-round games, keeping things relatively simple and picking their spots to be more aggressive worked before.

The sooner Team USA can establish that, the better because best defense against Russia is keeping them on their heels. That’s essentially what the U.S. did from the drop of the puck in their first meeting.

If the U.S. can establish and dictate the pace of this game, they’re going to have a great chance to win it.

2. Russia’s elimination game style feeds off of the opposition’s mistakes

I don’t want to say that Russia doesn’t care about the preliminary round since hey want to win every game, but they aren’t going to waste a ton of energy worrying about results until the medal round. It has served them well in six consecutive World Junior Championships where they have finished with a medal. Bouncing them from the final is a really tall order.

While the teams have changed over the years, Valeri Bragin has been one of the few constants. He has been behind the bench for four of those six straight medals. His teams play disciplined and they let the game come to them.  Every little mistake, every power play and every opening is a chance for them to pounce and they often do.

Just look at last year’s semifinal. The U.S. played a pretty strong game, stayed out of the penalty box for the most part and came in with one of the best offensive teams in the tournament. They were almost completely shut down in a 2-1 loss by the Bragin-coached Russian squad. It was a master class in team defense.

The notion that Russia is all offense is simply not true at the World Juniors. They defend as a team, with all five skaters playing a role. They are often going to have a strong goaltender, too, and do with Ilya Samsonov between the pipes. Russia will make you work for your scoring chances and if you ever get one, don’t miss. There just won’t be many if you can’t get your game established.

The U.S. has to shake out whatever was ailing them against Switzerland, because the plays they tried to force and the mistakes they made are going to end up in their net with a lot more regularity if Russia gets its game established.

If they play more like they did in the win against Russia, the U.S. has a much better shot. Using team speed and physical strength, the U.S. was able to break down the Russian defenses. They used chip zone entries very effectively, getting wingers behind the D to get to those loose pucks. The U.S. also converted on some of the few chances they got in that game.

This is going to be a really interesting chess match.

After rotating goalies throughout the preliminary round with great success, Team USA is sticking with Tyler Parsons.

The London Knights netminder got the initial start against Russia in the preliminary round and may have been Team USA’s best player in the third period of a really tight game. He also was excellent against Switzerland in the quarterfinal.

I’ve said all tournament that Team USA has three guys that could realistically be their No. 1 goalie. Joe Woll was so good in both of his starts and surely would love the opportunity to go in the medal round, but Parsons has given the U.S. a chance to win in every game, even when they weren’t playing their best. There’s no reason not to believe in him now.

The other factor to consider is that the medal games are tomorrow. I would doubt the U.S. changes up goalies, but if they want to, they can have a fresh option and still like their chances if they’re playing for gold.

Parsons has a .917 save percentage over three starts, allowing just five goals in 180 minutes of action.

Here is the rest of today’s lineup via USA Hockey: 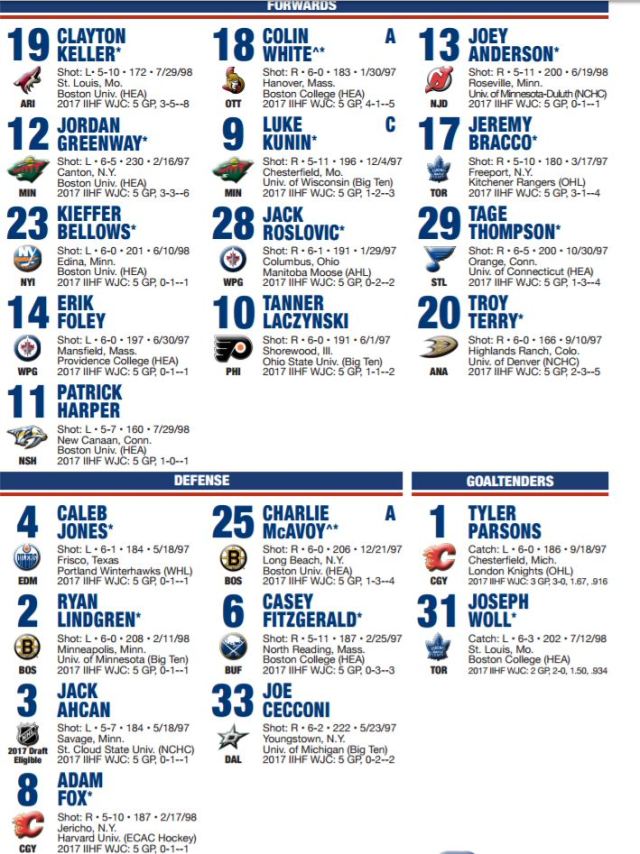 There haven’t been any changes to Team USA’s lineup since early on in the tournament. No real reason to change now.

4. Learning from the past

Bob Motzko has done such a great job keeping his team focused on the present. The U.S. players were saying all of the right things after the tight win over the Swiss and never seemed to get too high after the big wins over Russia and Canada. That will serve them well now.

They also have the benefit of learning from others’ mistakes against Russia in the medal round.

Last year, based on the pre- and post-game comments by head coach Ron Wilson, Team USA wasn’t especially prepared for how well Russia was going to defend and how physical they were going to be in the game. That was a critical error that definitely showed up in how the team performed. They just could not find any space to work with in that one and lost 2-1.

In the two previous quarterfinal losses, penalties sunk the U.S. in a most dramatic fashion. The quarterfinal in 2014 was one of the crazier meltdowns I’ve seen from a U.S. team. There was a five-minute span in the second period where they gave up two 5-on-3 power plays and Russia scored on both. The score went from 3-2 USA to 4-3 Russia and that was it.

The following year, the U.S. took five penalties in the first period and dug themselves into a hole from which they would not emerge despite holding a heavy shots advantage in the game. They lost 3-2.

While there’s no sense in dwelling on the past, there is so much that can be taken from those games. In each of them, I thought the U.S. beat themselves far more than Russia beat them.

A strong start, disciplined play and a little extra creativity in the offensive zone will go a long way for this squad. It should be a fun one.

I’ll have USA’s lineup here as soon as it becomes available, with some additional notes. Also, check back after the game for a full recap.

Some other quick notes: Be sure to check out my piece for NCAA.com on the contributions of top college hockey players for Team USA. I’ll also be on Lowdown with Lowetide to preview the game on TSN 1260 in Edmonton at 1 p.m. ET, if you’d like to tune in.

2 Responses to 2017 World Juniors: USA vs. Russia Semifinal Preview — Learning from the past