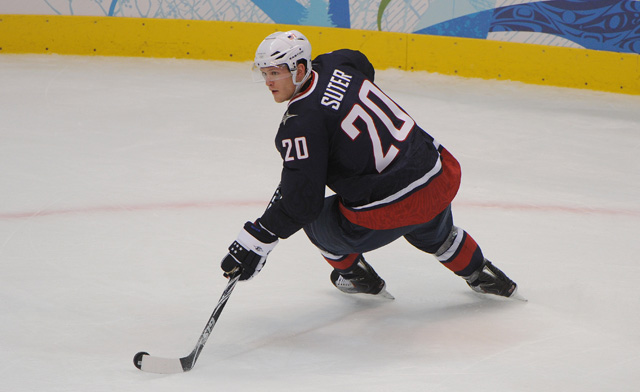 Over the last few years, Ryan Suter has become one of the NHL’s elite defensemen and is paid as such now after signing with the Minnesota Wild in 2012. This season, he is the league’s busiest defenseman, averaging nearly 30 minutes a night for the Wild and may be the most utilized defenseman in recent NHL history when the season is over.

His usage has been that more like a Clydesdale than human being and he’s excelling. Suter has been adamant that he wants to play big minutes. Eric Tulsky of SBNation detailed just how massive Suter’s workload has been this year.

Suter is playing three and a half minutes more per game than what the leaders played in recent years.

If Wild fans are hoping Suter’s usage will dip at the Olympics, don’t count on it. He probably won’t play quite as much as he does in Minnesota, save for some of those tighter games the U.S. is bound to be in, in Sochi. As a key veteran, he’ll have to be one of Dan Bylsma’s most trusted blueliners.

Suter also is among the most experienced players in international competition on the U.S. roster with 10 IIHF events under his belt including the 2010 Olympics.

In 2010, the U.S. had the stingiest defense at the Olympics and the best goaltender. Suter was on the ice for one 5v5 goal against the entire tournament. The only other even-strength goal that came against the Americans with Suter on the ice was Sidney Crosby’s gold-medal winner during 4-on-4 overtime.

The U.S. is getting Suter this year at his absolute best. He’s on pace for a career year with the Wild in a number of categories. The 28-year-old rearguard was a Norris Trophy finalist last season and now has 99 games of experience as a No. 1 defenseman at the NHL level. He is going to have to be Mr. Everything for Team USA and if he’s at the top of his game, the U.S. is going to be really tough to score against when he’s on the ice.

What he’ll bring to Team USA: Suter obviously brings a lot to this team. He’ll definitely be a minutes-eating defenseman who plays in all situations, particularly in those high-leverage situations in tight games.

Suter has been run into the ground this year in Minnesota, but it’s early enough in the year to expect him not to quite be running on fumes yet. He’s going to need his energy as he’s likely to play a ton in Sochi.

The thing that makes Suter so effective in playing such high minutes is how efficient he is with his ice time. There’s not a lot of wasted movement out there, which is something that can really only be acquired over time. Suter has had a lot of practice playing major minutes and that will certainly help.

That efficient style is so much more important on the bigger ice though. With more ground to cover, it’s important to find ways to conserve energy without getting too lax in the defensive zone. Part of that comes in taking better angles, not getting caught too deep and making simple plays, which is something Suter does on the regular in the NHL.

Suter has more experience internationally than any defenseman on the U.S. roster. He also played on a larger ice surface at Wisconsin as well. That will certainly go a long way in terms of how he plays. He’ll know how to navigate the bigger surface, even though it’s been a few years since he’s gotten out there.

Suter is part of Team USA’s designated leadership core and is likely to wear a letter. He’ll have a fairly young group around him and his experience will be so important for whoever he ends up playing with.

There’s no question, Suter is going to be one of this team’s most important players.

Memorable USA Moment: Suter has been on the international stage so many times. His performance at the 2010 Olympics and in numerous World Championship events all are pretty memorable. His play in Vancouver is definitely a highlight, but I wanted to dig a little deeper into Suter’s USA Hockey history, which is long and distinguished.

At just 16 years old, Suter was part of a group that really have become trailblazers in USA Hockey over the last decade-plus.

As the youngest defenseman on the U.S. National Under-18 Team in 2002, Suter had a goal and six assists in eight games at the World Under-18 Championship. Despite his youth, Suter played a sizable role on a team that included future Olympic teammates Zach Parise, Jimmy Howard and Ryan Kesler. They were the first American men’s team to win a gold medal in an IIHF A-pool event since the 1980 Olympic Winter Games.

That same group, with Suter again playing a large role, won the first-ever World Junior Championship two years later. Suter also helped the U.S. National Under-17 Team win the World Under-17 Hockey Challenge that year, so from a very young age, he’s been a big part of USA Hockey.

In the years since, the U.S. has won the World Junior Championship twice, while the U.S. National Under-18 Team has won gold six more times since 2002 including a streak of four straight from 2009-2012. Additionally, the number of American-born players selected in the NHL Entry Draft has spiked and U.S. first-rounders have become more of a norm.

It really wasn’t until that group of player born in 1984 and 1985-born Suter that Americans proved they were on equal footing with the world in terms of player development and international success.

Suter will look to join his father Bob, who won gold at the 1980 Olympics, as the first U.S. father-son duo to earn Olympic gold medals since Dave Christian accomplished that feat as a teammate of Bob Suter’s in 1980. Christian’s father Bill won gold in 1960 with Team USA.

Previously on Profile of an Olympian

1 Response to 2014 Olympics Preview: Profile of an Olympian — Ryan Suter