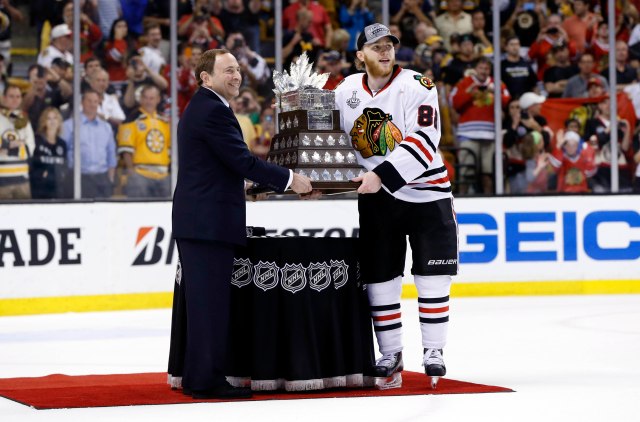 The trophy may have a giant maple leaf on it, but the Conn Smythe has belonged to the stars and stripes of late.

Patrick Kane of the Chicago Blackhawks was named MVP of the Stanley Cup Playoffs, making him the third consecutive American to win the prestigious award and fourth overall. He joins Jonathan Quick (2012), Tim Thomas (2011) and Brian Leetch (1994) in that exclusive club.

For Kane, the Conn Smythe win is another in a growing list of accomplishments pointing towards the Chicago winger as being one of the best American-born players in the game.

He has a Calder Trophy, two Stanley Cups and now a Conn Smythe and he’s just 24 years old. What’s next? Is there more? There sure seems to be.

It’s also a bit of a redemption story as Kane is coming off a humongous bounce-back season, both professionally and personally. He had a down season in 2011-12 and made matters worse after photographs surfaced of a drunken weekend in Madison, Wis. However, as the abbreviated 2013 season rolled around, Kane appeared refocused and played some of the best hockey of his young career.

During the regular season, Kane got off to an incredible start during Chicago’s remarkable 24-game points streak. He posted 55 points over the course of the season, just 11 points less than his 82-game output a season ago.

In the playoffs, Kane scored nine goals and 19 points, both second-most in the playoffs. Kane had a hat trick in the deciding game of the Western Conference Final. He also had three goals over Games 4 and 5, all of them big goals in the Stanley Cup Final.

Here’s another interesting stat. Through six NHL seasons, Kane has 424 points in regular-season play. Through the same time frame, at the same age, Mike Modano, the all-time leading American-born scorer in NHL history, had 431.

Considering Kane has dealt with a more defensive league and better goaltending in this era, being so close to Modano’s mark — just seven points shy — at the same age is astounding. Kane also has 71 points in the playoffs, while by age 24, Modano only had 37.

The Buffalo, N.Y., native is well on pace to become one of the most prolific scorers among Americans in NHL history and very well could be one of the biggest stars in the league if he continues on this path.

He will undoubtedly be one of the go-to offensive players for Team USA at the 2014 Olympics, assuming NHL players go. He already has a silver medal to his name in Olympic competition, a gold at the World Under-18 Championship and bronze medal from the 2007 World Juniors. He’s one of the National Team Development Program’s all-time leading scorers, so his USA Hockey track record is long and illustrious for such a young player.

As Kane continues to mature and advances his game as he did in 2013, there’s no reason he can’t become the face of hockey in the United States, if he isn’t already. He has the charisma and the talent to reach celebrity status in the NHL and that can only be good for the game nationally.

The only thing more exciting about Kane for the game in this country: His best years may still be in front of him.